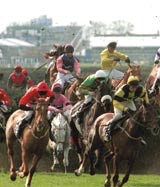 Super 12 Racing, the umbrella company for the UK’s top race courses, is considering postponing the launch of its football-style competition due to lack of interest in sponsorship.

Originally set to start in May, the Super 12 Challenges will be a series of races operating under a league format, with trophies for the top jockeys in both jump and flat racing. The aim of the initiative is to increase the sport’s mass appeal and get people to follow horseracing beyond the major events, such as the Grand National and the Derby.

The original plan was to secure £1m of sponsorship cash from a title sponsor and four associates. The company hired Sportsworld Media Group to negotiate the deals (MW September 20, 2001). However, Super 12 Racing chief executive Kim Deshayes admits that after six months, a title sponsor has yet to be found.

Deshayes says: “If we are in the situation of not having a title sponsor, we may decide to start the whole thing in November.” He defends Sportsworld’s effort to find sponsors, instead blaming the lack of interest on a downturn in sponsorship.

A final decision on whether to postpone the launch will be made in a meeting of all UK racecourse chief executives at the end of the month.