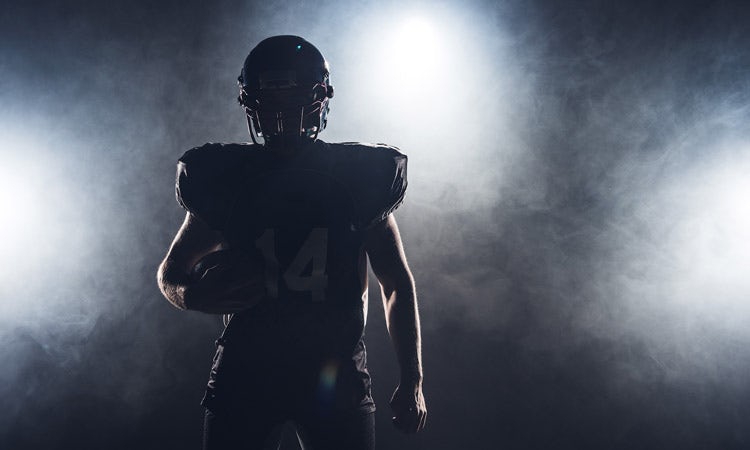 It appears the 2019 Super Bowl commercials set the tone for what took place on the pitch because according to new research, like the game itself, the ads lacked some punch with brands accused of “playing it safe”.

According to data from Realeyes Emotional Intelligence, humour and good storytelling won over fans, but enlisting high-profile celebrities wasn’t necessarily a recipe for success because while Christina Applegate helped M&M’s top the ranking, Bumble’s ad featuring Serena Williams came bottom of the pack.

It was M&M’s ‘Bad Passengers’ featuring Applegate that came out on top with a total score of 9.72. M&M’s ad achieved a perfect 10 on the EmotionAll scale, 9.7 for attention and performed better than 97% of the videos Realeyes has tested to date.

“Bad Passengers is an example of a highly relatable experience and the story is told in an engaging, humorous manner. The brand is also introduced [on screen] at the exact moment of high emotion [which has resulted in a] win for M&M’s,” Tina Gaffney, head of customer success at Realeyes says.

To generate the overall score, Realeyes used facial recognition technology to measure the attention levels and emotional reactions of 1,000 US consumers as they watched the ads broadcast live during the 2019 Super Bowl.

The software is designed to track and interpret consumers’ facial expressions and body language to gather relevant scores such as the ‘EmotionAll’ score which is based on four metrics: attraction, retention, engagement and impact. While brands’ ‘better than’ percentage reflects how much better its commercial has performed in comparison to every video tested by Realeyes to date, which is more than 18,000.

‘Attention’, meanwhile, measures how attentive or distracted viewers are. These scores are then combined to determine an overall score out of 10. 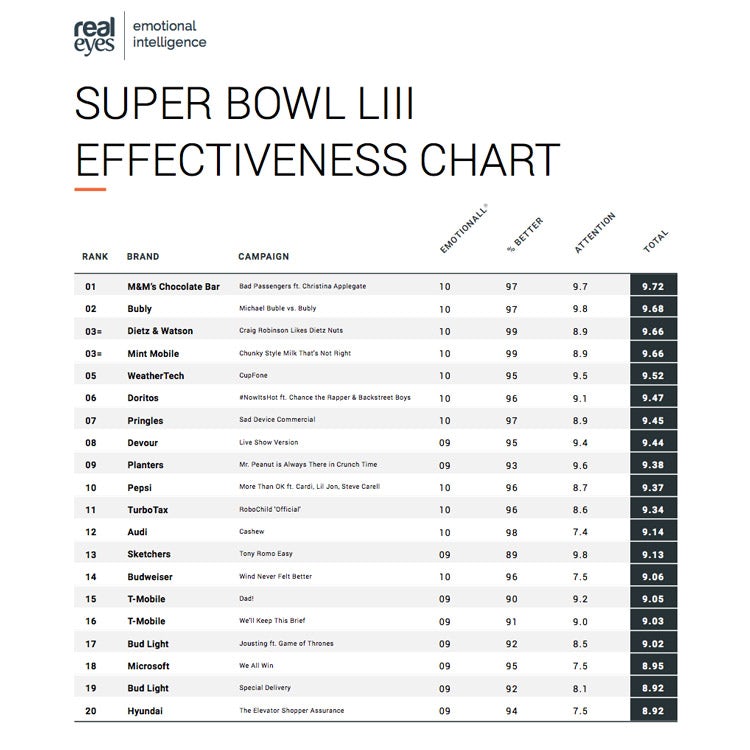 PepsiCo-owned Bubly’s quirky debut commercial came in second. Pepsi enlisted Michael Bublé for the humour-driven ad which sees the Grammy-winning singer convinced ‘Bubly’ is misspelt and is on a mission to correct the spelling and pronunciation.

Bubly finished with a total score of 9.68 after achieving an EmotionAll score of 10, 97% for better than and 9.8 on the attention scale.

At the other end of the spectrum was Bumble’s debut Super Bowl ad featuring Serena Williams.‘The ball is in her court’ sees the tennis star encouraging women to take control of their own stories.

Bumble, which was founded in 2014 and has 47 million users worldwide, is a dating app that only allows women to make the first move.

However, despite scoring 9.7 for attention it ranked dead last out of the 70 Super Bowl commercials with a total score of 5.89. 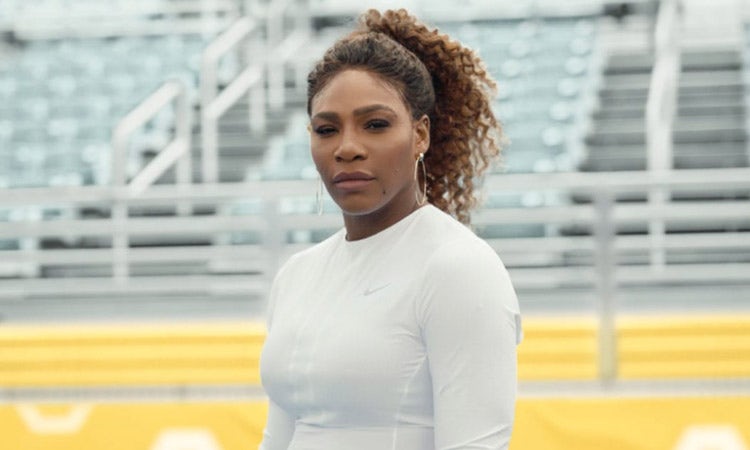 “The juxtaposition from a horror story to face lotion may have been too much for audiences to react positively,” Gaffney says.

“Bumble scored high in attention due to the celebrity [aspect] but the celebrity did not necessarily connect viewers to the brand resulting in a lower emotional connection to the storyline.”

So, adding a feminine voice to commercial breaks that are normally dominated by beer and fast-food ads wasn’t as well received as anticipated.

Overall, it appears brands steered-clear of political references this year, with key themes including female empowerment, which is championed by Bumble, Olay and Toyota Rav 4 while another key theme was ‘Throwback Thursday’.

“Throwbacks to talent from Backstreet Boys to Sex in the City effectively entertained audiences,” she says. 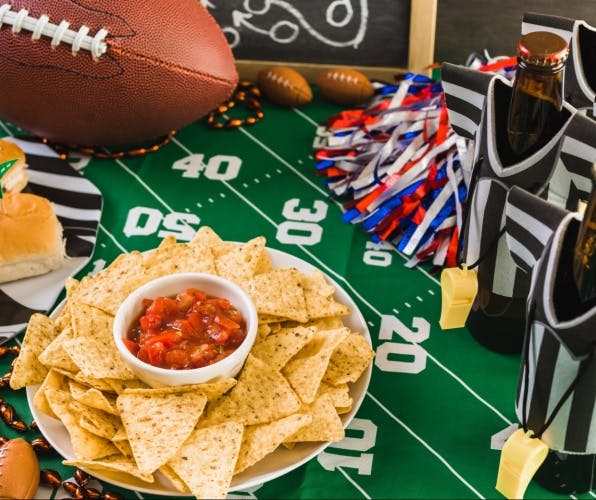 Those who highlight what digital media you could buy for the same price as a Super Bowl ad miss the point – they offer unrivalled effectiveness among the largest of audiences. 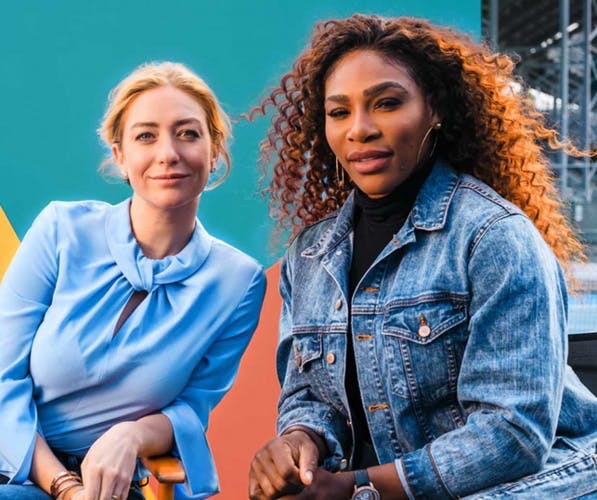 The Super Bowl is a colossal platform for advertisers, which this year sees female-focused brands including Olay and Bumble make their debut, alongside the usual parade of celebrity-fuelled show-stoppers. 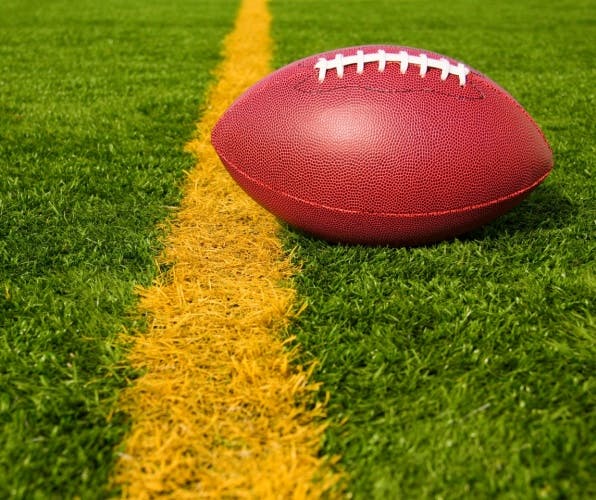 The Super Bowl headlines may lead marketers to believe the myth that TV is dead and the future is digital, but that’s only half the story.