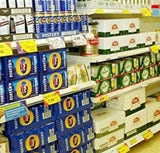 Representatives from Sainsbury’s, Asda and Waitrose told a House of Commons Health Committee today (15 October) that tackling the problems caused by some cheap, strong alcoholic drinks through higher taxation is a better approach than imposing a blanket minimum.

This year has seen minimum pricing proposed by academics, health bodies and the Scottish Government as a means to tackle binge drinking and excessive consumption.

Paul Kelly, corporate affairs director at Asda, told the Committee that minimum pricing is a “very blunt tool” that will penalise low income families, while targeted duty increases would be a disincentive to drinkers of high strength ciders and lagers.

He adds that the additional money earned from higher prices would fall “into the pockets of supermarkets” and not the Treasury, and threfore not invested in preventative campaigns.

Giles Fisher, head of alcohol buying at Waitrose, says alcohol misuse is a “broader cultural issue” that has to be tackled by using several means including through education in-store and on its website.

All three supermarkets rejected accusations from some of the MPs on the committee that in-store promotions result in more consumption, claiming that sales rise during the promotional period but drop soon after, indicating that people are stocking up, not drinking more.

Nick Grant, general counsel at Sainsbury’s, says discounting is a “product of a fiercely competitive market” with price promotions aimed at increasing market share and not consumption.

The supermarkets’ views on tax appear to be shared by The Conservative Party, which recently proposed plans to increase taxes on some high-strength lagers, cider and Ready To Drink brands as part of a plan to tackle the UK’s binge-drinking culture.

The Government has rejected calls for minimum pricing.