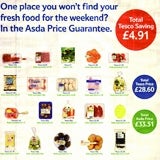 The Tesco ad has been banned after Asda challenged the press campaign that showed a selection of fresh food products with their prices and the prices of the same or equivalent products at Asda. Accompanying text said “Total Tesco Saving £4.91” and “One place you won’t find your fresh food for the weekend? In the Asda Price Guarantee.”

Asda said that the claim was misleading and that fresh products were included in the price guarantee and Tesco has apologised and blamed the ad on “an internal communication error”. It said that action would be taken to make sure a similar error would not occur.

The Advertising Standards Authority (ASA) welcomed Tesco’s acknowledgement of the error but said the campaign was clearly misleading.

Asda came under fire from Sainsbury’s thanks to a television campaign for its ’Price Guarantee’ in which the voiceover says “…we now guarantee that your comparable grocery shopping will be at least 10% cheaper that the other big supermarkets or we’ll give you the difference… About half of your weekly shop is comparable with the other big supermarkets and all of that is covered by the Asda price guarantee.”

Sainsbury’s argued that the ad was misleading because it believed the price guarantee excluded a number of “everyday” products and named 26 products not covered by the offer. However, Asda said five of these were out of stock at its rival with no equivalent when MySupermarket compiled comparison data for the campaign and 21 were not found directly comparable with a product at Asda.

The ASA said it considered the voiceover clearly explained the limits of the offer and all comparable products were included the ad was not misleading.

The ad watchdog did ban an Asda campaign in February.