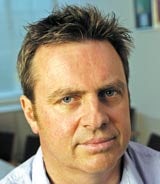 The appointment of Marcus Rich, formerly EMAP Performance managing director, as the new head of EMAP Advertising has been met with a mixed response from media buyers and left many in the industry wondering exactly who he is.

Several high-profile names, many with strong broadcast backgrounds, were linked with the job, but Rich, who has worked predominantly in the magazine sector, was never thought to be one of them.

One media buyer says his appointment as head of EMAP’s high-profile cross-media sales house was a “shock” and “a bit left-field”. But while there is widespread agreement that it is crucial for Rich to get out and about to raise his profile as soon as possible, others point out that he is already well-known within EMAP and can bring a level of stability – something that an external candidate may have found difficult to do.

Jim Freeman, the former head of radio and press at ZenithOptimedia and now head of trading at The Daily Telegraph, points out that he faces several challenges. He says: “He has a tough job ahead of him, given the massive personnel changes at EMAP over the past four to five months and the tough competition from the newly formed radio group GCap Media and a predicted explosion in weekly titles from other publishers. There may be a concern from the market over his lack of profile with customers.”

EMAP had been keen to bring in someone with a strong broadcast background, and with this in mind the job was offered to Tony Wheble, former commercial director of Flextech TV and former managing director of TV Travel Shop. However, he turned it down to join James Villa Holidays as managing director (MW May 5).

Rich does not have any direct broadcast experience. He has held a variety of positions at EMAP including managing director of FHM Worldwide and a stint as managing director of EMAP Australia. He returned to EMAP in the UK 15 months ago to take over as head of EMAP Performance, which includes its magazine, TV and online portfolio.

However, Rich’s appointment does bring an end to a period of instability at EMAP Advertising. As well as the departure of Dave King, last year the division also lost its broadcast sales director Tim Bleakley, who left to join Viacom Outdoor, and Theresa Coligan, who was EMAP head of magazine sales.

These departures did, however, allow EMAP to promote radio sales controller Karen Stacey to Bleakley’s role, while former managing director of EMAP Esprit Carrie Barker took over as head of magazine sales.

Rich has said that the time he has spent at EMAP Performance has helped him to build up his knowledge of broadcast and that he has a good team in that department who “know their way around”.

EMAP will be expected to respond to the launch of GCap Media – the merged Capital Radio Group and GWR, which also has a 27 per cent share in Scottish Radio Holdings. With 22 stations, Scottish Radio Holdings is likely to be taken over completely in the foreseeable future by GCap Media. This, coupled with tough trading conditions for the industry, means EMAP will find itself under increased pressure.

Many, however, believe that King, who had a high profile across the magazine and broadcast sectors as a result of his building the EMAP advertising team and introducing a TV-style of trading, will be a hard act to follow.