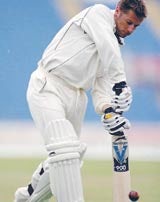 Surrey County Cricket Club corporate development director Nick Cooke has left the club without a job to go to, following the club’s failure to find a shirt sponsor for this summer.

Despite not having lost a game so far this season, the club has failed to attract a sponsor. Surrey originally asked for £300,000 for a one-year sponsorship deal but has now cut its price to £80,000, an amount that insiders say will barely cover costs.

The club’s former sponsor, AMP – which also sponsored the Oval, Surrey’s home ground – is in the process of withdrawing from the UK.

A Surrey spokesman says Cooke’s failure to generate sponsorship income meant that his position became an unnecessary expense. He adds that the club needs to find a sponsor by the end of May.

He says: “This is a huge bargain – to sponsor the league leaders – but no one is out there. The deal even includes hoardings at the ground for international games this summer, which is where the main value lies.”

According to a club source, Surrey had been close to a £250,000 deal with paint maker Sandtex last month, but the company withdrew following poor financial results.

The club is now considering a profit-sharing arrangement, where it will be receive a percentage of the business generated through its sponsorship. Another option would be to split the home and away shirt sponsorships into two smaller deals.