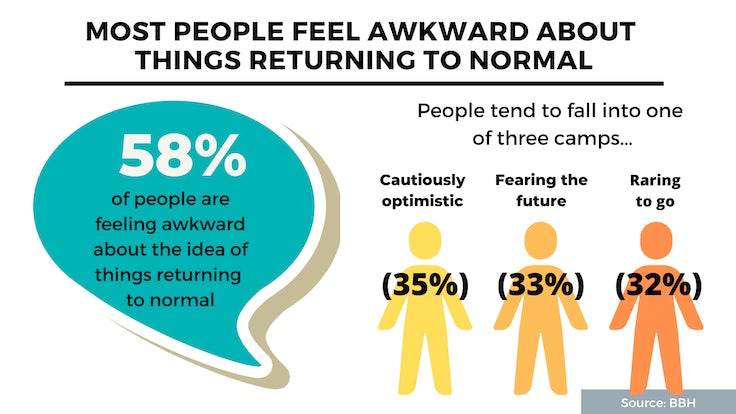 Most people feel awkward about things returning to normal

More than half (58%) of people are feeling awkward about the idea of things returning to normal as restrictions begin to ease.

The vast majority (96%) of the people who fall into the fear the future category describe themselves as ‘anxious’, with 77% also suggesting they are ‘concerned’ about the road ahead. More than half (54%) feel stressed and 36% are confused. This cohort is the most balanced when it comes to socio-demographics. 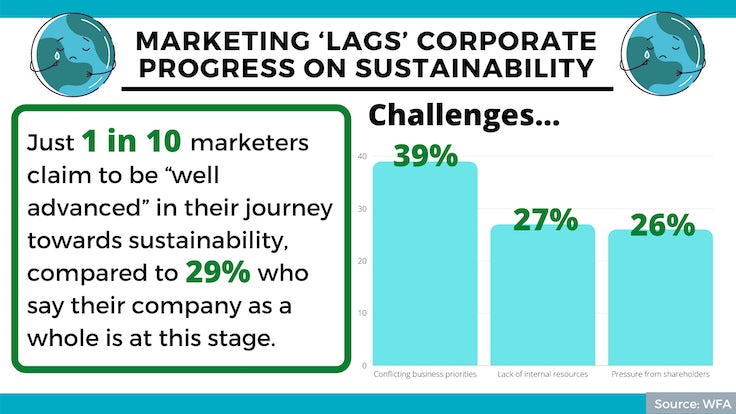 Just one in 10 marketers claim to be “well advanced” in their journey towards sustainability, compared to 29% who say their company as a whole is at this stage.

At the same time, 95% of marketers believe marketing can make a difference in the sustainability journey and 88% agree consumers fundamentally expect brands to help improve the environment.

A significant part of the challenge for marketers stems from an organisational level, as sustainability does not sit neatly into an existing function. Marketers cite challenges such as conflicting business priorities (39%), lack of dedicated internal resources (27%) and pressure from shareholders (26%).

Marketers also express apprehension towards communicating corporate efforts even when they have something positive to say. The vast majority (89%) say companies need to be “braver” in communicating their efforts but only a quarter do, in many cases due to the fear of consumer backlash.

Some 16% of those questioned claim to have a good story to tell but are not yet ready to share it, while 47% say they need to improve their narrative. 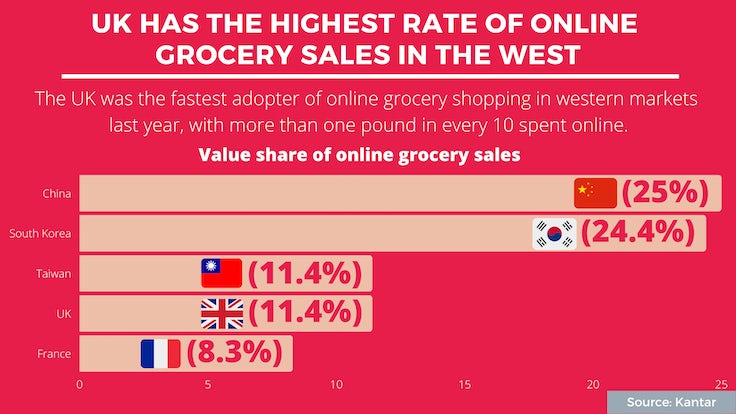 The UK was the fastest adopter of online grocery shopping in western markets last year, with more than £1 in every £10 spent online (11.4%). In every other western market ecommerce is still in single digits, including just 4.1% in the US, illustrating the potential for growth.

The pandemic has accelerated ecommerce growth in almost all markets, with an additional 5% of global households buying their groceries online at least once in 2020. This is equal to an additional 67 million households.

The strongest growth was seen in Asian markets, with 25% of grocery shopping in China now happening online, followed by South Korea (24.4%) and Taiwan, which comes in equal third alongside the UK with an 11.4% share. France is fifth with 8.3%. 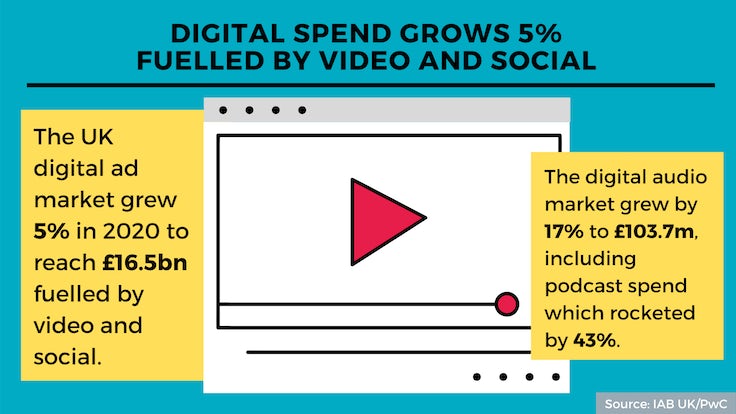 The UK digital ad market grew 5% in 2020 to reach £16.5bn, fuelled in large part by growing spend on video and social media.

This growth was propelled forward by a strong second half to the year, after spend fell in the first six months of 2020, according to IAB UK’s Digital Adspend report, carried out with PwC.

During the first quarter of 2020 investment in digital ads grew by 10%, before dropping sharply by 20% during the second quarter. Spend then bounced back by 10% in the third quarter, growing by 18% in the fourth quarter.

For the first time the report includes digital audio and podcasting data, which shows the digital audio market grew by 17% year on year to £103.7m, including podcast spend which rocketed by 43%.

The report also reveals that display is the fastest-growing digital ad format – up 11% in 2020 – fuelled by video and social spend, which both increased by 19%. Spend on search rose by 7% year on year to account for 51% of all digital ad spend, coinciding with the explosion of ecommerce. Spend on smartphone ads grew by a further 10%. 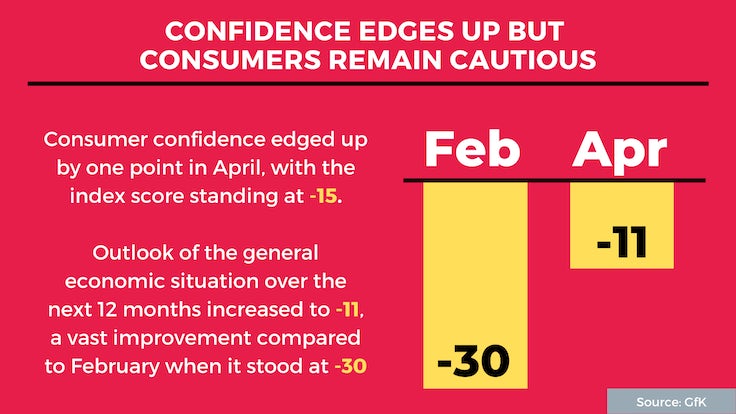 Consumer confidence is improving but concerns over new Covid variants, rising inflation and debt are having an impact on people’s outlook, according to the latest GfK Consumer Confidence Index.

Overall, confidence edged up by one point in April, with the index score standing at -15, as consumers take a more guarded view of the future.

People’s outlook of the general economic situation over the next 12 months increased by six points to -11, a vast improvement compared to February when it stood at -30.

And while there has been a one-point slip in the major purchase sub-measure to -12, consumers have indicated they are more likely to make big ticket purchases than they were in January, when the figure stood at -24. Both of which suggest consumers are feeling more optimistic.

However, there remains a big gap between how people see the general economic situation over the past year (up two points to -58), compared to the next 12 months.

People’s view of their personal finances over the coming year remains strong at 10. Although there is no improvement compared to March, this is significantly higher than the -14 recorded in April last year.

Looking back over the past 12 months, the index measuring people’s personal finances is showing a one-point decline to -3.

Meanwhile, the savings index is up one point to 22 in April, a 17-point increase compared to last year. 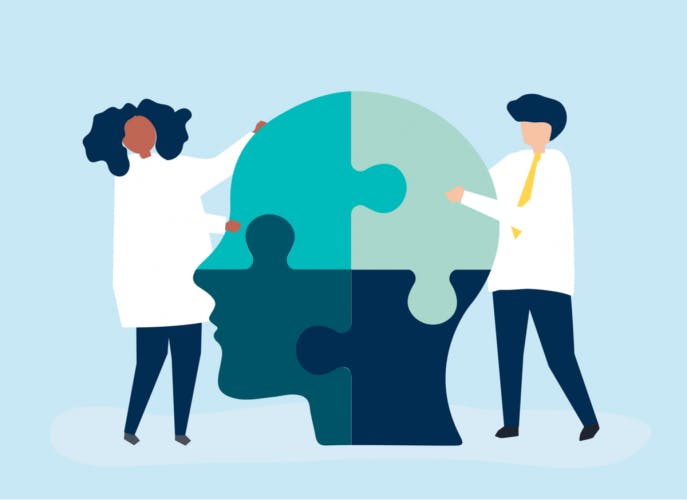 Many marketers use metrics of no relevance to brand or financial outcomes, but the following concepts can help guide you towards more effective measurement.

At the end of every week I look at the key stories, offering my view on what they mean for you and the industry. From the launch and collapse of the European Super League, to P&G’s top marketer firing himself every 18 months, it’s been a busy week. Here is my take.