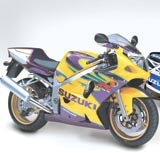 Japanese car and motorcycle manufacturer Suzuki is looking for a sales and marketing director for its motorcycle business.

The role is new and will also include responsibility for Suzuki’s all-terrain vehicles and marine engine businesses. David Seward is sales and marketing director for the automobile division, but until now motorcycle activities have been looked after by the rest of the marketing team.

Suzuki, which is part-owned by General Motors, is one of the leading sports utility vehicle brands in the UK. Its range includes the 4×4 Grand Vitara, for which Suzuki launched a television advertising campaign last year.

BLM was appointed in 2002. Suzuki began its advertising activity the same year, with a press and poster campaign to support its Liana hatchback model.

Suzuki’s main competitors in the motorbike market are Kawasaki – which has just launched a review of its European advertising arrangements – Honda and Yamaha.

Telegraph Group journalists are threatening strike action after the company announced planned job cuts of up to 90 editorial staff. The redundancies are part of cuts that will help pay for a &£150m investment in printing presses.

O2 is launching a digital campaign, created by Agency Republic, to promote its Pay &amp; Go International SIM card to the UK’s Australian, New Zealand and South African expatriate communities. The SIM card costs &£14.99, and consumers using it can make phone calls and send text messages to the relevant countries for as little as […]