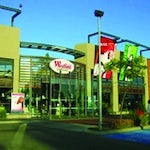 The marque will broadcast the live event, which takes place on 31 August, on screens placed in the nation’s major railway stations. Both the experiential and TV campaign are both created by Nexus/H.

The live ad is being branded as a ’UK media first’ by Suzuki GB. It will be broadcasted across the JCDecaux-owned transvision network. The network contains 17 screens at railway stations across the country, with the London-based screens located in Euston, Charing Cross, Victoria and London Bridge.

The Suzuki Swift TV ad was rolled out on Monday 23 August and features graffiti artists Josh Sutterby and Richard Henderson, who are known as Alfa and Discoteck respectively.

Both artists will appear at Westfield Shopping Centre to recreate the illustrations from the advert. The two artists are both involved in Street Wars, an underground drawing battle.

The campaign is timed to coincide with the launch of the new Swift on 1 September 2010.

The creative from the TV advert uses the strapline ’Designed for Life’. The same creative is being used in direct mail, press, online, EDM and outdoor activity, which is all being handled by Nexus/H. A microsite has also been set up to support the campaign.