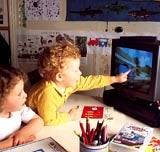 The advertising industry’s campaign to counter calls for a ban on advertising to children was boosted this week after a leading academic suggested that the Swedish government had misinterpreted his research on children’s understanding of TV ads.

Dr Erling BjurstrÃÂ¶m, associate professor at the National Institute for Working Life in Sweden – on whose work the Swedish government bases its ban on TV ads to children under 12 – told delegates at an Advertising Association (AA) conference that it would be wrong to infer from his research that children under 12 do not understand advertising.

He said that while some 12-year-olds do not have a full grasp of the messages contained in ads, the same could be said for some 25-year-olds. His research makes no recommendations on whether or not advertising to under-12s should be banned.

BjurstrÃÂ¶m adds that banning ads was ineffective because children could access satellite channels, which are free from the Swedish legislation.

Many in the industry fear that Sweden will use its presidency of the European Union to sow the seeds for a Europe-wide ban on advertising to children to be included in the 2002 review of the European Broadcasting Directive.

BjurstrÃÂ¶m’s words were greeted with enthusiasm by the AA, which had organised the With the Eyes of a Child conference as part of the campaign against any ban.

AA spokesman James Aitchison, says: “Most academics agree that children develop an understanding of advertising at the age of five or six, but the Swedish government has insisted that Dr Bjur strÃÂ¶m’s research shows that their ban on ads to under-12s is justified. Now the author is standing up and saying he has been misinterpreted. This is a big thing and something that we are not going to forget.”

ITV has finally drawn the curtains on Inspector Morse, but John Thaw is to reappear on the screens in one of ten new dramas created for the channel’s winter and Christmas schedule. The schedule was unveiled this week by the director of programmes David Liddiment. John Thaw will be cast opposite Sarah Lancashire for the […]

Casino operator London Clubs International has appointed start-up marketing agency Inferno to handle its advertising in advance of a radical shake-up of rules for gaming ads, expected next year. LCI, one of the top five UK casino operators with a turnover of &£145m, hired the agency without a pitch following an introduction through the AAR. […]

National communications company Redstone Telecom has handed its Â£5m advertising account to Mortimer Whittaker O’Sullivan, which will take the brand onto TV for the first time.