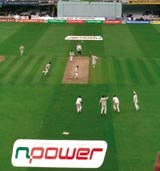 An interesting editorial choice lumping together a story of sex scandal at the Football Association with one about the renewal of a sponsorship contract between npower and the England &amp; Wales Cricket Board (ECB).

Congratulations on identifying both as sports governing bodies, but less well done using the headline “…npower lambasts cricket governing body” to infer these negotiations have any of the gravity of the mess the FA is in.

The headline bears little, if any, relevance to a fairly benign article about how npower may have to delay negotiations on renewing its contract until after the new television rights deal has been finalised. There is no mention of npower not renewing it, or of the fact (as reported in The Times on April 5) that despite a depressed market it is thought the value of the ECB TV deal will increase due to the successes of the Twenty20 Cup and the England Test team.

Perhaps you could be a little more positive and highlight some of the ways the ECB and the clubs have successfully marketed the Twenty20 Cup.

With very limited budgets they have taken a mature product in a stagnating market and successfully rebranded it to increase its appeal.

Last week, BSkyB unveiled poor growth in subscriber figures alongside a strategy to boost its position, but City reaction to it was muted. Will the clouds clear? asks Amanda Wilkinson

Starcom MediaVest has been appointed to handle the planning and buying account for Space Kitchen &amp; Bathrooms following a pitch against undisclosed agencies.