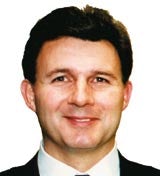 SwitchCo, the working group formed to co-ordinate the UK’s switch to digital television, is looking for an agency to handle its £10m media planning and buying account and media strategy.

It is also looking for a direct marketing agency, a Web design and production agency and a call-centre provider.

SwitchCo was formed by UK public service broadcasters at the request of the Government.

A WPP Group consortium, including Hill &amp; Knowlton and JWT, has been working on projects for SwitchCo for the past two years. WPP-owned design agency Lambie-Nairn created SwitchCo’s name and logo.

SwitchCo is headed by former Lloyds TSB marketing chief Ford Ennals. It will co-ordinate the technical roll-out of digital terrestrial TV across the UK, region by region, to a timetable agreed to by the Government; communicate with the public about what is happening; and liaise with equipment manufacturers, retailers and consumer groups.

The Government has set an analogue switch-off deadline of 2012, but as this coincides with London’s hosting of the Olympic Games, it is thought that this date may be pushed back to 2013 to avoid any embarrassing technical difficulties that may leave UK viewers without coverage.