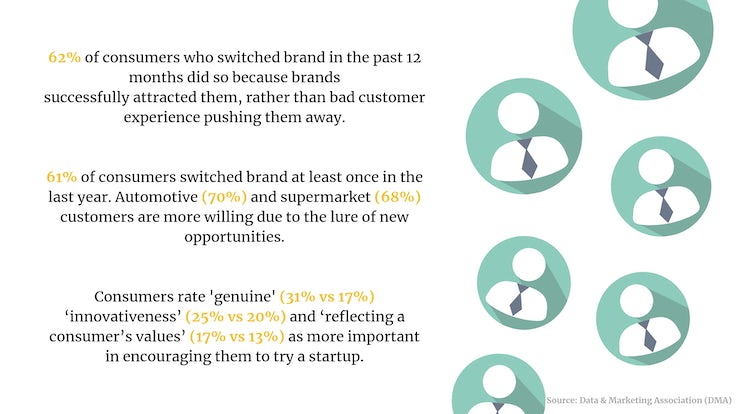 1. Bad customer experience not the top reason for switching brands

62% of consumers who switched brand in the past 12 months did so because brands successfully attracted them, rather than bad customer experience pushing them away.

61% of consumers switched brand at least once in the last year, with automotive (70%) and supermarkets (68%) showing the highest percentage of customers willing to switch brands due to the lure of new opportunities.

Only banking found previous poor customer experience to be an equally decisive factor for the switch, where it was a 50-50 split.

Consumers see a brand being ‘genuine’ as more important in encouraging them to try a startup versus an existing brand they haven’t tried before (31% vs 17%). ‘Innovativeness’ (25% vs 20%) is also important, as well as ‘reflecting a consumer’s values’ (17% vs 13%).

2. Rising digital expectations are a threat to B2Bs 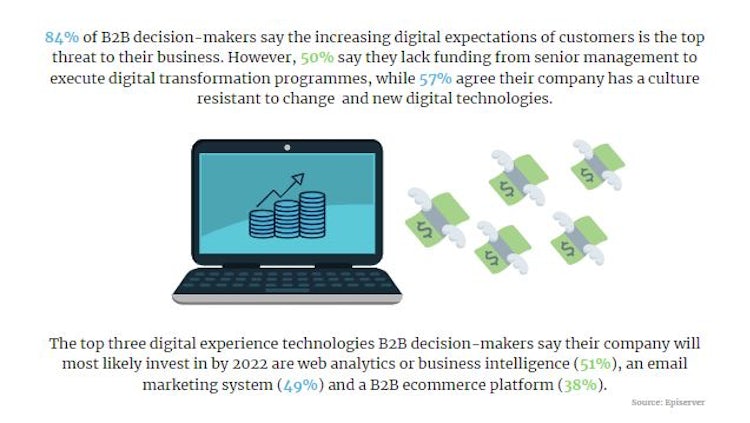 84% of B2B decision-makers say the increasing digital expectations of customers is the top threat to their business.

41% of B2B buyers say self-service functionality would make it easier to do business online, in addition to pricing on the website (44%) and easy scheduling with a salesperson (37%).

However, 50% say they lack funding from senior management to execute digital transformation programmes, while 57% agree their company has a culture resistant to change and new digital technologies.

The top three digital experience technologies B2B decision-makers say their company will most likely invest in by 2022 are web analytics or business intelligence (51%), an email marketing system (49%) and a B2B ecommerce platform (38%).

The number one website feature/functionality to be adopted in the next 12 months is personalised content (36%) followed by improvements to the mobile experience (33%).

By 2025, 72% believe the majority of their company’s revenue will come from B2B ecommerce websites that they own and operate.

3. Consumers over 50 feel under-represented by brands 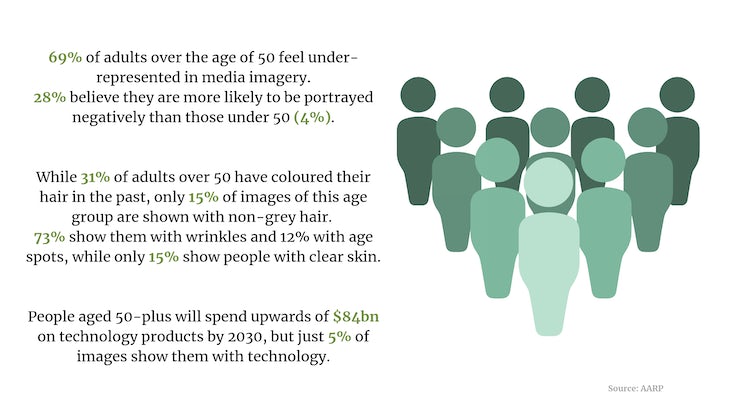 69% of adults over the age of 50 feel people their age are under-represented in media imagery, while 28% believe they are more likely to be portrayed negatively than those under 50 (4%).

While data shows that 31% of adults over 50 have coloured their hair in the past, only 15% of images are shown with non-grey hair. Similarly, 73% of images show this demographic with wrinkles and 12% with age spots, while only 15% show people with clear skin.

In addition, while people 50-plus will spend upwards of $84bn on technology products by 2030, just 5% of images show them with technology.

They are also more likely to be shown at home (one in three) than those under 50 (one in 10), with just 4% of images of 50-plus people showing them with co-workers.

4. Consumer confidence up in September 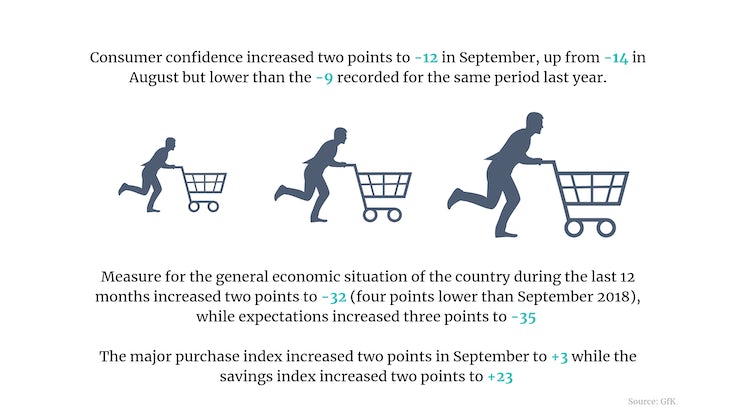 Consumer confidence increased two points to -12 in September, up from -14 in August but lower than the -9 recorded for the same period last year. 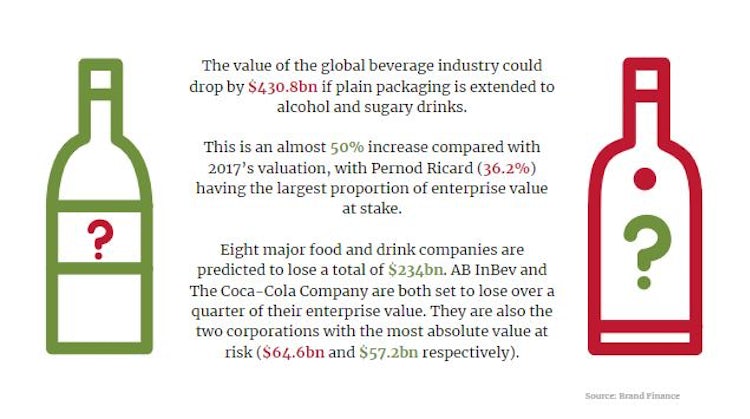 The value of the global beverage industry could drop by $430.8bn if plain packaging is extended to alcohol and sugary drinks.

This is an almost 50% increase compared with 2017’s valuation, with Pernod Ricard (36.2%) having the largest proportion of enterprise value at stake.

Eight major food and drink companies are predicted to lose a total of $234bn. AB InBev and The Coca-Cola Company are both set to lose over a quarter of their enterprise value. They are also the two corporations with the most absolute value at risk ($64.6bn and $57.2bn respectively).

In addition, PepsiCo would see over two-thirds of its brands affected by legislation – the highest proportion of any company outside of alcoholic beverages. This would amount to a value loss of $44.8m. 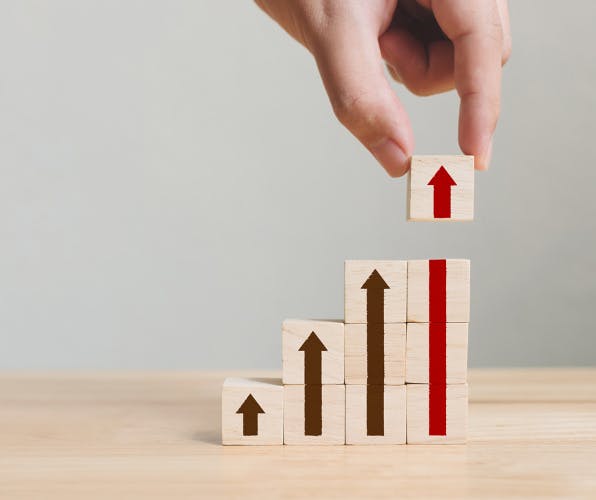 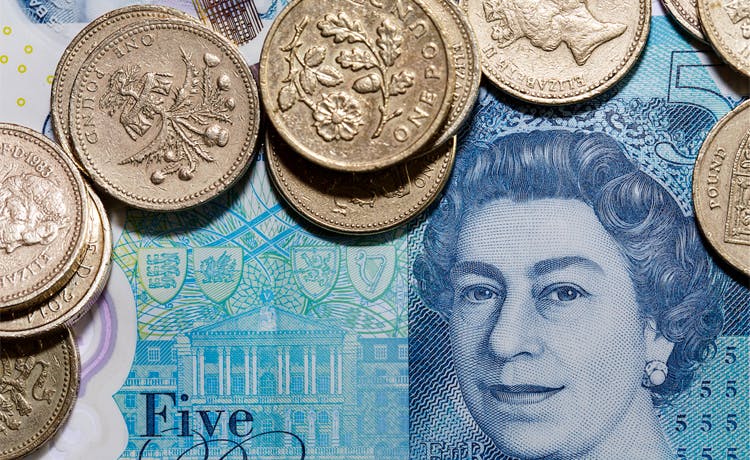 We have gathered together data from Marketing Week’s 2019 Career and Salary Survey to provide a quick look at key findings, including marketing salaries by seniority as well as the pay gap across sectors.