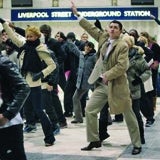 What was innovative about the T-Mobile Dance campaign?

From a marketing point of view it was innovative because it pushed the boundaries of advertising. Instead of just being a TV ad, or an out-of-home ad, or a radio ad, it became one piece of content that we then used throughout our consumer touch points. We filmed the event and that became the TV ad. It also became the PR. We used dancers from the event to do an around the country experiential tour.

For that reason it became quite innovative within the industry. There are a lot of case studies around what you can do to make more of your production budget – how you can make each media channel more integrated.

You really need to make sure you’re getting a lot more impact for the money you spend. This is one of the first campaigns to show that you can do that.

A brand asset became a real strong sales tool for us.

How did the Dance campaign drive the T-Mobile brand forward?

It gave consumers something to say about T-Mobile. We’re a challenger brand in the industry. We tried various campaigns to try to get our brand message across. For the first time this told people what we were about, which is that life is for sharing.

We started hearing that back in qualitative research after the event and the campaign went out. We increased our brand consideration, which is a really hard measures to move using just advertising. It also had a real result for us on sales. We had record footfall: 16% up year on year. Our online orders were up over 20%. It really shows that you can move brand metrics and sales metrics at the same time.

It gave us that viral, word of mouth, talkability factor. For internal employees, it gave them something to stand behind and feel proud of. That word of mouth is so much more powerful than anything that we can put out.

You recently launched T-Mobile’s latest ad “Welcome Back” with passengers arriving at Heathrow Terminal 5 to be greeted by singing crowds. How has this moved the flash mob campaign on from last year?

We were quite conscious with Welcome Back not just to focus on a flash mob. For us, this campaign isn’t really about flash mobbing, it’s about the emotional stories that we tell – they’re kind of “Punk’d” moments. When the people come through, giving them a surprise. Each one of those six to eight stories has a really emotional story in itself and that was the movement on that we wanted.

It was coming up to Christmas time and airports are always quite emotive places anyway, so we really wanted to take the emotion that you feel in that location and around this time of year and amplify it because that’s our role as T-mobile and life’s for sharing.

What’s next for the campaign?

With “Welcome Back” we’ve just had Merton – the YouTube musician – doing some activity for us. We took him to various airports around the country and he gave people their own personal welcome home. All those videos are on our YouTube Life’s For Sharing channel.

We ran a competition on our Facebook site with BA, where people recommended to us people that they wanted to be reunited with. We gave away a plane’s worth of flights, so people could be reunited with people for Christmas. Again getting that Life’s For Sharing across. We’ll be hoping to build on that this year.

Did you attend the Engage Awards?

Our agency, Saatchi & Saatchi was there. Hopefully we’ll be there this time, winning another award. We’re definitely re-entering this year. Welcome Back is obviously our big one at the moment, so we can get that in and maybe some of the early activity for this year.

How did winning this award boost business/motivate the team?

With these ads, we put them out within 24 hours of them being filmed. That’s quite a lot of days with no sleep. For my team specifically to know that the industry thinks that they’re recognisable campaigns is really important and a massive motivator.

Wider than that, it’s really nice to see that people recognise the brand’s work. It gives the rest of the business the motivation to try to do different things within their teams. That’s what a challenger brand is all about, trying to do things a bit differently.

Learn more about the Engage Awards 2011 categories, including the Telecoms & IT category, here