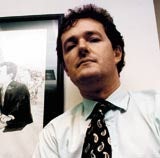 Shareholder concerns encouraged Mirror management to sack him; technology allowed for the manipulation of photographs and the duping of Morgan and his readers. But it also enabled the lightning-fast detective work that led a maligned British Army regiment to launch its well-aimed offensive against Morgan.

With its push for greater openness and accountability, Democracy Mark II has found a natural home on the internet. For a long time now, I’ve been much more likely to read a word-of-mouth recommended website (often in the form of a “blog”, a form of personal publishing) or an aptly forwarded e-mail than I have a traditional media offering.

And, increasingly, I’ve taken part in online petitions and mass e-mailings, professionally coordinated by Joe and Joanna Public. Newspapers hate this. While banging on about the importance of a free press, they themselves can’t cope with their readers having too much freedom. They whinge when readers talk back to them in well-organised groups, especially if that means a flood of e-mails.

Just like companies that preached dialogue with consumers but in reality had no interest in a two-way communication channel, so the bastions of our free press prefer to divide and conquer when it comes to the public.

But time and again, these self-appointed go-betweens (and here I include all traditional media channels) have been unmasked as the highly partisan, unreliable voices that they are.

With the infinitely more democratic voices proliferating in the world of new media, we are evermore aware that the emperors of old media have no clothes. It’s no mere coincidence that the Mirror’s circulation has taken such a dramatic tumble over the past year.

That’s why I’ve been roaring with hollow laughter at Morgan’s defenders, who claim that the role of “sinister, foreign” shareholders in his downfall is ominous news for Britain’s “free press”.

As it happens, shareholders are at the cutting edge of what we might call Digital Democracy. Apart from teen chatrooms (now sadly tainted by the “grooming” scandals), online investor bulletin boards are probably the most dynamic area of the internet. There’s nothing quite like putting your money where your mouth is to get you talking.

So while Morgan and his supporters may look in the Mirror and see a dangerously besieged UK media, marketers shouldn’t be so blinded by arrogance. Instead, keep an eye out for Democracy Mark II, coming to a consumer near you.