As the bar keeps getting raised as to what marketers have to do to get consumers to listen, many brands are using music as a means of engaging with their audiences – from sponsorship of live venues, to association with music-focused media brands.

Bauer Media has been conducting periodical research, known as Project Phoenix, into the music market. The latest data in a UK survey of 16- to 44-year-olds, shows 75% identified themselves as being passionate about music, and music was ahead of all the other interests and hobbies surveyed.

In addition, new methods of listening to music have meant that time spent listening is growing, with 44% saying they listen to more music than a year ago, and only 10% listening to less than last year.

Furthermore, the huge variety of methods by which people can listen to music means the public has more opportunity to listen to a much wider variety of tunes than previous generations. The research indicates that eclectic tastes are no longer the preserve of the music-obsessed few. In fact, those least passionate about music were interested in nearly as many genres of music (15 out of a possible 26), as those most passionate about music (18 out of 26).

It seems that consumers are energised about music, and this also came through in research into the state of the live music scene. The survey was conducted at the height of concerns about the health of live music, given that Glastonbury had a harder struggle to sell tickets this year than previously, and a general feeling that an oversupply of live music was dissipating some of the excitement.

However, the research shows that those surveyed found the live scene was more exhilarating than ever. In fact, events like music festivals are playing an important role in terms of a “rites of passage” for young people in much the same way as a back-packing holiday does – it is an experience that many don’t want to miss out on, even those who aren’t overly passionate about music. This is also reflected in the size of the live audience – 59% of the 16- to 34-year-olds surveyed had been to a gig or concert in the last year, and nearly a third (28% of 16- to 34-year-olds) go to a gig or concert at least once every three months.

Live concerts are seen as the best and most authentic way to experience music, and the importance of the live experience has become even greater in the context of a world where music content has become ubiquitous. Findings reveal that as single/album release dates have become far less significant, it’s now festival or gig dates that are the heartbeat of the music calendar in the minds of consumers. This raises important questions for marketers about the best timing for associations and sponsorships.

Perhaps the most surprising finding was related to attitudes towards consumer brands getting involved in music. In previous music research, Project Phoenix found that most respondents were ambivalent about brand involvement, as long as they didn’t get in the way too much, while consumers who were most passionate about music were worried about artists “selling out”.

The latest qualitative research finds consumers are now much more positive about brand involvement, and what was most intriguing was that it seemed to be those who were most passionate about music who were the warmest towards brands getting in on the music act.

When these results were further explored, it was found that they were borne out by the data, with those most passionate about music the most accepting of brand involvement. This is driven by the fact that it’s these consumers who are the first to recognise the struggles of the music industry, and are therefore willing to see advertisers get involved to support various areas of the music business. Examples of advertiser involvement in music that received endorsement from respondents were Carling’s sponsorship of the Academy venues in London, a sponsorship recently taken over by O2. Also seen as credible are O2’s rebrand of the Dome and the Wireless festival. Respondents felt that the advertisers in these cases were actually putting something into the scene, rather than making it a simple badging exercise.

This finding also reflects research findings in other sectors that consumers in general have become more pragmatic about advertiser involvement, although brands still have to toe a careful line. Consumers were quick to spot those music associations that did not feel authentic, lacked credibility and compromised the artist’s integrity. People are most willing to accept associations between brands and music if they feel the sponsors are investing in the music scene in a “real way”.

Overall, the findings are encouraging for any brand thinking of using music as a way of getting closer to consumers, especially those in younger age groups. 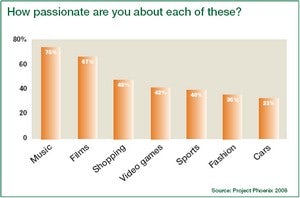 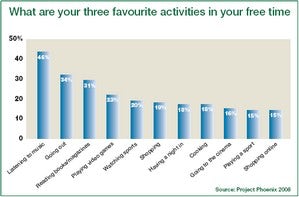 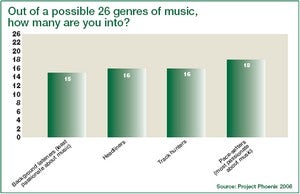