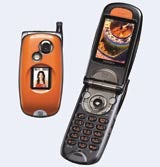 S MS text messaging was launched in 1992 in the UK, but it was not until mobile phone operators introduced cross-network text services in the mid-Nineties that SMS experienced a dramatic and – for network operators – surprising rise in popularity.

This mass-market appeal has yet to wane as 25 billion texts were sent last year in the UK, up 4.5 billion on the year before (Mobile Data Association). This is certainly the age of the text generation.

As the mobile phone market has become increasingly competitive, operators have been searching for the next trend that will take off in the same way that text messaging has. But, so far, consumers have been slow to adopt technological advances.

Data from TNS shows that while the launch of colour screens and camera phones has encouraged consumers aged between 12 to 18 years old to update their handsets more regularly, only 15 per cent of customers have actually sent photos between phones over the past three months. This implies that the real potential and value of multi-media messaging (MMS) is a long way from being realised.

Yet the mobile phone sector’s real hope for capturing consumers’ imaginations – and cash – over the next year is third-generation (3G) technology. All of the major networks, with the exception of T-Mobile (and therefore Virgin which uses its network), are now launching 3G offerings; T-Mobile is expected to follow suit later this year. But while 3G services may be available, operators still have a long way to go in educating consumers about the full benefits and uses of 3G phones and services. Until this has been achieved, it is difficult to judge how big the influence of 3G will be.

The impact of 3’s launch in 2002 should not be underestimated. Although it suffered from poor sales at first, the operator intensified its attack on the market last summer with an aggressive price-led marketing strategy. This has resulted in 3 taking a significant share of handset sales and upgrades away from other providers.

The take-up of 3G services is not the only major hurdle to mass-market adoption. The larger handsets of 3G-enabled mobiles pose a problem in a sector increasingly driven by consumer desire for smaller, contemporary, handsets. This trend began with phones such as the Motorola v.dot and the Nokia 8210 and continues with Samsung D500, Nokia 7280 and Motorazr V3.

Currently, 3G devices are not able to compete competitively for this sector of the market, and therefore struggle to attract those customers whose primary concern is the look and feel of their mobile phone, as opposed to its functionality. Mobile phone manufacturers and operators need to develop sleeker, more attractive devices to help 3G to develop among younger and fashion-conscious consumers.

The key for mobile telecoms marketers must be to find the right positioning for the right consumer. Nokia, for instance, experienced a significant slump in sales from 46 per cent in the 12 weeks to December 2003, to 32 per cent for the same period last year. This was in part due to its failure to spot consumer demand for clamshell handsets.

There are vast differences in requirements for various sectors of the population and mobile telecoms providers must analyse and understand the needs of each customer group to maximise potential loyalty and revenue.

The 19- to 24-year-old age group, for instance, spends more on mobile phones than any other age group, paying on average &£47.53 each month (according to TNS TelecomTrak data for the year to December 5, 2004). This group is happy to be tied to a contract, rather than use pay-as-you-go packages. This engenders stronger commitment, reduced churn and ultimately higher revenues for providers.

Furthermore, this consumer group is cash-rich, fashion conscious and interested in the latest technology, and as such is the perfect target market to foster as early adopters of 3G services.

However, alongside developments in 3G mobile technology, there are increasing opportunities for simple, voice-based services for older consumers. The growing demand for such services is an area that easyMobile, which launches later this month, plans to cater for.

While the over-55s may spend relatively little on mobile telecoms, they spend much more on their landline, contributing to over 35 per cent of total fixed-line revenue. A clear, attractive and, most importantly, simple combined home and mobile package could be a potentially lucrative revenue stream for mobile operators.

Irrespective of consumers’ age, operators must give them what they want, rather than what operators want to provide. The operators that find out what customers really want out of 3G, as well as what they are willing to pay for, should lead the charge in the next phase of development in the mobile market.

Companies using search marketing need to look beyond the size of a search engine’s audience when choosing where to spend their budget for buying keywords, the latest research says. According to online research specialist Nielsen/NetRatings, which has just released its first MegaView Search report specifically comparing audiences and click-through rates, those search engines with the […]

Digitalisation is changing the rules of engagement, yet too many companies fail to hold our hands as we try to embrace the technology. By Robert Dwek

Toucan is to launch a mobile phone venture in addition to its fixed-line service. T-Mobile, which already has similar deals with Virgin Mobile and easyMobile, will provide the network.