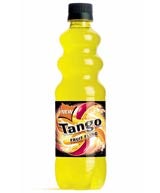 The move follows the recent decision by Britvic to axe another part of the Tango portfolio. Tango Strange Soda, originally launched as Freekee Soda, was ditched last month (MW January 22).

Tango Fruit Fling was launched last year as part of a brand overhaul, which also introduced new packaging and a promotional deal with Sony PlayStation.

But Sainsbury’s, Asda and Safeway have either already delisted or are about to delist the flavour. Other supermarkets have not yet made a decision on the future of the product.

However, Britvic category director Andrew Marsden says that Tango Fruit Fling is leading growth in the “fruit fizz” sector and the delistings are to do with trading issues rather than brand issues.

But this was on the back of a heavily increased marketing spend, including £4.52m on advertising for the year to December (Nielsen Media Research).

Britvic is running a Tango on-can instant-win promotion with PlayStation2. The Play4Real promotion is supported by a £3m marketing budget.