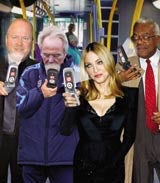 Having spent billions upgrading to 3G networks, mobile operators are pinning their hopes on rising demand for mobile TV. But consumer demand so far has been lukewarm, and questions remain over how much advertising the new medium will be able to carry. By Catherine Turner

If mobile phone companies have their way, a few years from now, the UK’s public transport system will be packed with commuters engrossed in watching TV clips downloaded to their handsets. Telecoms and broadcast giants are teaming up to create new revenue streams and encourage take-up of a technology that has cost them billions of pounds to provide.

The results this week of two mobile TV trials from BT and O2 indicate the medium is of interest to consumers, most of whom would be prepared to pay for it. But analysts warn of hype in an immature service, and mobile users have yet to be convinced about using their phones for more than talk and text. They say the industry’s great white hope could prove a costly flop.

“It is important to set realistic expectations,” says Strategy Analytics associate director Neil Mawston. “There is definitely a market for it, but quite how big is open to debate. Will everybody be watching 30 minutes a day, five years from now? Probably not. A more realistic scenario is 20 or 30 per cent of the population watching a few minutes a day. People will be snacking on mobile TV.”

BT partnered with Virgin Mobile for a six-month pilot, revealing most people are only willing to pay about &£5 per month for the privilege of catching up with their favourite shows on the move. Digital radio proved more popular. While 59 per cent of the 1,000 trial users rated mobile television as appealing or very appealing, 65 per cent said the same about digital radio. Users watched an average of 66 minutes of television a week on their phone but listened to 95 minutes of radio. BT now plans to roll out the Movio service this summer.

Meanwhile, O2 has unveiled preliminary findings from a trial with Arqiva, formerly NTL Broadcast, and Nokia in Oxford. O2 found that the triallists were choosing to access TV on their mobiles for an average of 23 minutes per session, with one to two sessions a day. The interim results also showed that demand was highest during commuter travel times with a further peak at lunch. O2 also says seven out of ten triallists would want digital radio in addition to the 16 channels already offered.

The O2 trial used DVB-H, the hand-held version of traditional broadcast transmissions, to deliver a package of free programmes to users. DVB-H, which is not yet licensed by Ofcom, differs from DAB-based technology used in the BT and Virgin trial, and from 3G services streamed by operators including 3, Vodafone and Orange. Vodafone is offering packages free until February, with consumers expected to pay &£5 for each of its two subscription services.

Consumers involved in the trials have been enthusiastic about the services. But analysts suggest that the price of phone upgrades and packages, and perceived problems with handset size and battery life, may well mean that take-up is limited in the short term.

Operators put on the show

Gartner analyst Carolina Milanesi questions why people would tune in to mobile TV. “Are people really going to be that desperate to watch shows on their phones?” she asks, adding personal video recorders and content on demand mean consumers can time-shift their viewing at home. “There is a lot of scepticism from the consumer’s point of view. It is more push from the operators than pull by the consumer. It is not a request from users at this stage.”

It may be early days for the nascent technology, but Milanesi says operators and broadcasters see it as one of the services that may push 3G adoption. Mark Heath, director of research at Sound Partners, agrees. He believes that in the short term, operators could “push mobile TV as a loss leader”. Having spent billions buying up the 3G licences, they have thus far failed to exploit the extra benefits for consumers who are still tied to 2G operations.

Yet 3G networks cost less to run than 2G. With all subscribers on 3G, mobile operators could push fixed-line telephony in terms of pricing and positioning. “This is going to be the year of 3G and people recognising it actually exists,” predicts Heath. He says operators have nothing to lose. If television remains a niche service, with people only dipping into it, 3G technology will suffice. If it proves a big hit, companies could move into broadcast technology such as DAB or DVB-H, where more people could view the service.

A recent Juniper Research report predicts revenue from mobile TV subscriptions will rise from just $136m (&£77m) in 2005 to $7.6bn (&£4bn) in 2010. The number of mobile users subscribing to streamed or broadcast TV services is expected to reach 65 million worldwide by the end of 2010.

In a separate survey by Management Network Group, a UK-based management consultant, mobile TV was ranked as the second most desirable mobile entertainment service, behind music, by 13- to 24-year-olds.

Vodafone head of content and advanced messaging Al Russell is bullish about mobile TV and sees it as vital to future strategy/ “The impact of video on how people use their phones will be profound.”

To date, Vodafone has delivered five million streams since launch. Russell says mobile TV is important because it potentially appeals to a wide segment of customers. “That is not necessarily true of ringtones or games,” he adds. Ringtones and the charges associated with them have created a negative image of high cost in consumers’ minds. Operators must dispel this by offering clear-cut subscription packages.

Nobody is yet clear how advertising will fit in, says Russell, revealing Vodafone will run several pilots with varying degrees of advertising content. Mawston believes advertising is unlikely to be prominent in mobile TV because people will mostly watch it for short periods of time. “People’s tolerance for ads will be low,” he claims.

Mawston adds: “I don’t see mobile TV getting momentum in the UK until at least 2008, although there will be a niche market from next year. It is a question of timing – hyping a technology before it is mature enough for the mass market has been a problem before.”

He says digital rights management – how content providers, broadcasters and operators share revenue and profit – will also prove troublesome. Despite this, broadcasters seem as keen as mobile operators to tap into a potentially lucrative new market, with BSkyB this month launching a mobile service, and Channel 4 setting aside &£500,000 for mobile content.

CNN senior vice-president of advertising sales Jonathan Davies says it is important to exploit any new platform, but believes mobile TV is not yet a viable revenue stream. “CNN is a brand that is everywhere. People should be able to access it everywhere,” he says.

Mobile TV providers must prove the new medium is palatable to consumers – or whether, once again, they will have bitten off more than they can chew.