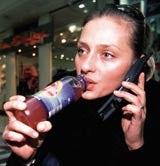 Targeting individuals using location-based advertising might not look out of place in a science fiction film such as Minority Report, but the strategy has yet to catch on in reality.

Despite over-eager predictions during the dot-com boom that retailers would target consumers through their mobile phones with the latest promotions as they passed a store, the concept has so far failed to make it out of the cinema.

However, that could be about to change. Gizmondo, a handheld gaming device due to go on sale next month, will carry a new direct advertising medium called Smart Adds (MW last week). The console, on which consumers can play games, music and films, send text messages and take pictures, will also show television-quality ads.

The ads will be time-and-place-sensitive, meaning advertisers can target consumers at relevant times. For instance, restaurants will be able to send Smart Adds to users in a particular area, outlining lunch or dinner specials.

This is not the first time such an idea has been proposed. In 2000, mobile phone advertising operator ZagMe trialled a location- sensitive service at Lakeside and Bluewater shopping centres. A year later, Barnett’s Taxi Advertising looked at developing a system to enable ads on the outside of cabs to be constantly updated through a satellite navigation system. However, both schemes faded away.

ZagMe targeted mobile phone users with coupons as they shopped, but the scheme appealed to only about ten per cent of users and the profits were minimal. In the end, ZagMe failed to attract further investment, even though the technology itself worked.

Lakeside marketing manager Clare Lamont says one barrier to a positive consumer response was that people did not like the idea of having to send a text message to the company when they arrived at the shopping centre, saying how long they intended to be there. Barnett’s Taxi Advertising, now known as Taxi Media, looked at developing changing ad panels on the sides of vehicles to suit their location. The project never got off the ground, but the company is working on in-cab advertising on screens and is awaiting approval from the Public Carriage Office.

Taxi Media general manager Greg Forster says: “I don’t think the technology is quite ready for ads on the outside of cabs. The inside of a taxi is a more focused environment and allows people to listen to the ads.” Research suggests the location-based applications that work best are the ones which provide time-sensitive information, such as the location of the nearest taxi or cashpoint.

Mobile phones would seem an obvious vehicle for location-based advertising, with new 3G handsets already capable of downloading film clips. A study by communications regulator Ofcom revealed last week that consumers spend more on mobile phones than on land lines, with mobile users spending &£10.7bn in 2003, an increase of 16.3 per cent on the previous year.

However, while some mobile phones feature place finders, it is questionable whether they will be able to carry television-quality ads in the near future. A Vodafone spokesman says it is something that has been looked at, but adds that it would be “almost impossible” to implement at the moment.

Yet James Osborne, from BT’s global broadcast services, counters this. He says the capability is there to stream ads that pass through the BT Tower in London to mobile phones. Technology is advancing at an ever-increasing rate, but an equally important part of the equation is how the potential customer feels about being targeted.

Co-founder of mobile marketing specialists Enpocket, Jeremy Wright, says that the regulations surrounding permission-based marketing are already in place. He believes that when ads come to mobiles they will “blow people’s minds”.

Starcom MediaVest group strategy director Nigel Foote believes the ads would have to be creative enough to engage consumers. He says: “People want to be targeted as individuals rather than from the mainstream. You’ve got to have respect for the audience and that gets lost a bit.

“Young people are more ad literate nowadays and can see through shallow attempts. They’re quite available, but it’s got to be based on respect and relevance.”

Business development director at outdoor advertising specialist Clear Channel, Pat Chaundy, agrees that the key is relevance. He adds: “It’s about getting the right people with the right message at the right time. It’s about finding something that isn’t going to be perceived as a one-off gimmick and it’s got to have a tangible benefit to the consumer.”

The maker of Gizmondo, Tiger Telematics subsidiary Gizmondo Europe, says it will ensure that the ads the console carries will be relevant to the user. About 20 leading brands are already believed to have signed up. Peter Lilley, head of Smart Adds, says: “Smart Adds is not going to be an appropriate avenue for every advertiser; that’s what targeting means. But for the right advertiser with the right message, it will be very powerful.”

Yet not everyone in the electronic games world is convinced of the potential. Nintendo has ruled out the possibility of its handheld console, Nintendo DS, which is due out next year, carrying ads. A spokesman says: “Our consoles are designed to provide the best possible gaming experience and are not intended as an advertising medium for unrelated products.”

But elsewhere, mobile technology is already being used to target specific groups of consumers with time- and location-sensitive ads. Enpocket recently targeted young males in a certain age range and area at half-time of a Manchester United match with a text message to promote a football tournament sponsored by Nike.

But pinpointing individuals may remain the stuff of fantasy for some time. Even Lilley admits that singling out individual Gizmondo users for special offers from shops will be difficult to do at this stage, while Mark Sherwood, managing director of communications planning agency Rocket, says: “Targeting people individually seems to be a long way down the line.”

The Advertising Standards Authority (ASA) has upheld complaints against The Daily Express for a misleading promotion for free DVDs from Woolworths. A front-page splash stated: “Unbelievable but true – 18 free DVDs for every reader”. However, the ASA found that Woolworths stores had only been allocated 50 DVDs each from the promotion. The Express was […]

First Great Western, the train operator, has launched a new onboard magazine called Reach produced by the Press Association. The quarterly magazine will have a print run of 75,000 and will carry ten pages of advertising, to be sold by Archant Dialogue.

Drambuie Liqueur in the UK is reviewing its Â£1m media planning and buying account at Burkitt DDB. The agency was also the incumbent on the advertising business, which it recently lost globally to Soul.