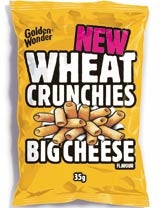 Golden Wonder has appointed Bristol-based design agency Taxi Studio to revamp its crisp brand Wheat Crunchies with new packaging and a review of its flavours.

The repackaging aims to update the brand without losing its broad appeal.

The design, which uses brighter colours and more prominent branding, aims to be visibly louder to reflect the “crunchy” nature of the snack. It has also developed the “Make Some Noise” line for the back of packs to further emphasise the point. This may be used in future advertising campaigns.

As part of the revamp, Golden Wonder has dropped the Doner Kebab flavour, which was launched in February last year, and has replaced it with Big Cheese. It has also reformulated the Crispy Bacon flavour to improve the taste.

Golden Wonder is offering consumers the chance to make suggestions for new flavours, which it will make if there is sufficient demand. It follows the reintroduction of Ringos last year after more than 12,000 consumers signed an online petition to bring them back.

Golden Wonder has been working to revitalise its brand over the past few years, in an effort to increase its share against market leader Walkers Snacks. It has revamped its Nik Naks and core Golden Wonder ranges (MW August 14, 2003) and last year it launched Golden Skins, a thick-cut, premium crisp with the potato skin left on.