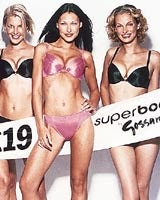 Lingerie company Gossard and TBWA/London have parted company following disagreements over creative treatment of the brand.

This will be Gossard’s third agency appointment in just over a year. TBWA/London grabbed the &£1.5m account from Partners BDDH without a pitch last October. Partners BDDH held the business for less than five months. It was appointed after Abbott Mead Vickers.BBDO resigned from the account in June last year, ending an eight-year relationship with the company.

Gossard has already shortlisted agencies to take on the &£5m account.

TBWA chief executive Garry Lace says: “We are happy to have parted company with Gossard. It is a company that, in the end, we simply couldn’t do business with.”

Walkers’ Doritos brand is to be the new club sponsor of First Division club Wolverhampton Wanderers, in a two-year deal worth up to &1.5m, depending on the club’s success. The Doritos logo will feature on the Wolves shirts from August and is the biggest deal in the club’s history. It includes branding around the stadium […]

Companies that wish to motivate their sales staff with rewards are discovering the utility of online incentive schemes – they offer speed and convenience for companies and staff alike. And they are a valuable information source for the former,