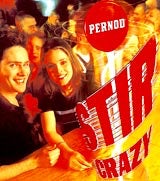 Groupe Pernod Ricard has appointed Saatchi &amp; Saatchi’s Team Saatchi to handle the creative advertising for the relaunch of Pernod in the UK.

Saatchi &amp; Saatchi in Paris will be responsible for Pernod’s international advertising.

The UK account has been dormant since the business moved out of D’Arcy several years ago. The last European work for Pernod was created by DMB&B in Germany.

Mark Davis, marketing director for PR Brands, the UK spirits subsidiary of international drinks company Pernod Ricard, says: “The appointment follows a major marketing review of the brand, which has not been advertised in the UK for the past two years. This process has established a strategic repositioning and stylish new look for Pernod, which forms the basis of the advertising brief.”

Pernod Ricard is in the process of introducing new packaging for the brand across Europe. An ad campaign aimed at young professionals aged in their late 20s to mid-30s is expected to break in the summer.

The decision to reposition Pernod follows international research into customer attitudes towards the brand. The research, conducted last year, was commissioned after TV campaigns failed to capture the target market of 18to 24-year-olds.

Pernod Ricard and Diageo, who bought the Seagram drinks empire last December, are awaiting regulatory clearance for the deal.