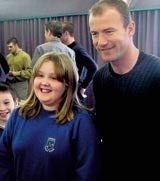 Sport England is to team up with commercial companies and sporting celebrities such as Alan Shearer as part of its healthy-eating and pro-exercise ad campaign.

The body has appointed Team Saatchi following a three-way pitch against TBWA/London and McCann-Erickson. Team Saatchi will initially create a pilot campaign in the north-east of England.

Commercial partnerships will also be sought to help push the campaign.

Sport England marketing director Nick Wake will not comment on whether the organisation will put restrictions on the types of company eligible to support the campaign.

The Government has come in for criticism recently for not creating a unified strategy to tackle the problem of obesity. Health secretary John Reid has called an obesity summit in April, which will bring together government departments, food companies, nutrition experts and consumer watchdogs.