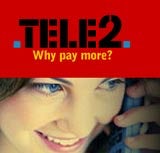 Swedish telecoms company Tele2 is understood to be looking for an agency to handle a marketing push.

The company, which ran a high-profile advertising campaign earlier this year, comparing its prices with BT’s, has been in talks with integrated and direct marketing agencies in recent weeks. It is not known whether it will hold a formal pitch.

Tele2 does not have a retained advertising agency in the UK as its creative work comes from overseas. But BLM Media won its media planning and buying business, estimated to be worth &£15m, in January last year following a pitch against MindShare, Zenith Optimedia and Carat.

The company, which also has a presence in France, eastern Europe and Scandinavia, called the pitch at the end of 2003 ahead of a major marketing campaign (MW December 11, 2003). Tele2 ended its relationship with Starcom MediaVest, which launched the brand in the UK, earlier that year.

Alpha marketing director Martijn Groot hired the agency after a pitch against incumbent Velocity and Red Cell Response. Media duties are handled by Zed Media. Neither agency is expected to be affected by the review.

Hotel company Travelodge is reviewing its Â£4m advertising account, held by Euro RSCG, in the wake of a rebranding exercise earlier this year.

LeapFrog Toys is starting a series of programme sponsorships on children’s television network Nickelodeon next week as part of &£2.5m brand push. LeapFrog, which makes technology-based educational toys for pre-school children, will sponsor Thomas the Tank Engine &amp; Friends from next week, as well as Dora the Explorer from October. The sponsorship is part of […]

How low would a company have to go before settling on Eddie “the Eagle” Edwards to launch a campaign? The Diary only asks because the acrophobic ski-jump legend has been carefully handpicked to launch the SolihullActive initiative to combat the couch potato culture. Without being unkind to Eddie, the Diary hasn’t heard much of him […]