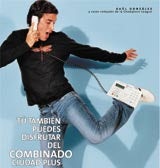 Spanish telecoms giant Telefonica is reviewing its estimated Ã¢âÂ¬300m (£209m) global media planning and buying with a view to consolidating the accounts.

The business is held by Carat, MindShare and Universal McCann, which each work on different European markets. A shortlist is being drawn up and an appointment is expected to be made in the coming months. It is not known if outside agencies will be invited to pitch.

The contract, which will cover all of Telefonica’s markets except Argentina and Brazil, is believed to be the largest offered by a Spanish company. In 2003, Telefonica is reported to have spent Ã¢âÂ¬134m (£93.5m) on advertising in Spain alone.

Spain’s one-time phone monopoly operates about 44 million fixed lines around the world and its mobile unit Telefonica MÃÂ³viles has 20 million subscribers in Spain.

Telefonica MÃÂ³viles is part of FreeMove, an alliance formed by four of Europe’s leading mobile network suppliers at the start of last year, set up to rival Vodafone. In September, FreeMove handed its £30m pan-European advertising account to Young &amp; Rubicam Europe. The remaining members of FreeMove are Orange, T-Mobile and Telecom Italia Mobile.

Telefonica is thought to be in the running to buy the Czech government’s controlling stake in the national telecoms operator Cesky Telecom, along with Vodafone.