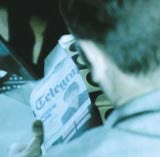 The Telegraph Group is thought to be making up to 30 of its sales team redundant, including some long-serving staffers.

The publisher has said it is making redundancies in Telegraph ad sales in line with cuts in the editorial team of approximately 17 per cent. The sales department has a head-count of about 180 people.

Group ad manager Jonathan Wilson and display advertising manager Ken Breen are thought to be retaining their positions, but ad director of classified Stephen Dunk is believed to be among those leaving.

Former senior Telegraph executives have expressed surprise at the job cuts. One says: “The head-count is already a lot lower than that of The Sunday Times or The Guardian.”

The Telegraph declines to comment on the numbers taking redundancy, but a spokeswoman says: “It’s a minimum of front-line sales staff and will not impact on client service. Client interests will be strengthened with a charter for customer service and media agency assessments.”

The Telegraph is making the cuts to help finance a &£150m investment in new production facilities that will offer improved colour in its newspapers.