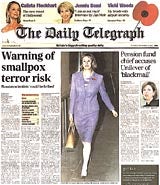 The Daily Telegraph is gearing up to launch its first standalone consumer magazine next year.

The personal finance magazine, called Your Money, will be available from January 21 and will carry Daily Telegraph branding.

The Telegraph Group is planning to launch a raft of consumer magazines following the launch of Your Money.

The Daily Telegraph already includes a section called Your Money, which will remain unchanged. The editorial team of the Your Money section will also work on the magazine.

Daily Telegraph enterprises director Alex Stitt says: “This is the first time that the Daily Telegraph has used its muscle in the consumer magazines market. Hopefully, this will be the start of a rolling programme of Telegraph-branded magazines.”

The Financial Times is understood to be launching a weekly A4 supplement to replace its daily “management funds” section.

Nobody from the FT was available for comment as Marketing Week went to press.