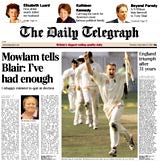 Your article entitled “Times Sports Daily launches first” (MW May 10) is nonsense. The Times’ copycat supplement, in its guise as Sports Daily, was launched on Tuesday May 8 and as such, is far from stealing a march on The Daily Telegraph.

On Monday May 7, The Daily Telegraph launched its daily sports section, and followed it on May 8 with the first Tuesday standalone section. The Daily Telegraph has indeed stuck to its promise of becoming the first broadsheet newspaper to produce a standalone section dedicated to offering the best in sports journalism on a daily basis. The Telegraph was the first UK broadsheet to launch a separate Monday sports supplement (in 1990) and also as the first to launch a Saturday supplement (in 1998). Is it any wonder that others follow in our wake?

I have read Marketing Week for many years and have always been impressed by the way it covers marketing news in depth and at speed. Sometimes, however, the subbing goes a bit astray. “Jazz FM hires its first head of marketing” offers a good example. “Jazz FM has appointed Nicola Young as its first head […]

In Iain Murray’s back page piece, (MW May 10), he writes that Phoenix the calf is the “sole survivor of a wholesale massacre of…kith and kin.” Surely that should be “kith and kine”? Bob Pierce Ambience London SE5 For the uninitiated: “kine” is a Biblical word for “cattle” – Ed

P&G has put Big Brother-style cameras in homes to carry out consumer research, but will it ever replace traditional methods?