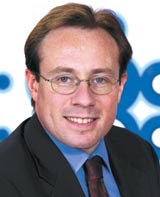 His departure follows Telewest’s announcement last month that it is stripping out a layer of management by merging its business and consumer divisions, resulting in about 1,500 job losses.

At the time it also appointed Mark Luiz, chief executive of its content division, as chief operating officer with responsibility for business and consumer divisions.

The managing director of Telewest’s business and carrier services division, Adam Smith, has also left the company as part of the restructure, which is expected to filter through to the marketing teams of both the consumer and business divisions in due course.

Jansen, who is only 34-years-old and a former group marketing director at Dunlop Slazenger Worldwide, is understood to be in receipt of offers for senior management roles elsewhere. Trained at Procter &amp; Gamble, Jansen was last year linked to the role of chief executive of BT, left vacant by Sir Peter Bonfield and filled by Ben Verwaayen.

In an internal statement, Telewest chief executive Adam Singer says of Jansen: “He has built a professional, talented group of people, who have been instrumental within Telewest, delivering seven straight quarters of operational growth.”

At Telewest’s AGM on Tuesday, Singer said that the company, which is &£5bn in debt, could in the future face a funding gap and that it might be forced into restructuring its balance sheet.