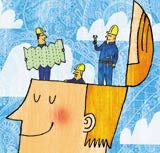 In his latest book, Blink, writer Malcolm Gladwell tells the story of a tennis coach with an uncanny ability: he can predict when a player is about to double fault. The catch is that the coach is absolutely incapable of explaining, even to himself, how he knows what he knows.

Through anecdotes such as this, Gladwell makes the point that people are, by nature, instinctive and not reflective creatures. The harder we ponder something, the less sure we become of what we know. This is an uncomfortable thought for companies paying large sums of money to hear what consumers have to say about their brands. But what if it were possible, quite literally, to get inside your customers’ skin and experience the world though their eyes?

The idea of using physiological indicators – such as sweat, heart-rate, muscle tension, eye movement and neural activity – to gauge how people react to a product or an advertisement has been around for years. While US companies such as Ford and Goodyear have been experimenting with this for some time, UK businesses have been more sceptical, but that could be about to change.

Out of your mind

With recent advances in brain science, marketers have proof that subconscious learning plays a huge part in shaping people’s feelings towards brands. This has prompted some in the industry to question the relevance of research methods that rely heavily on conscious memory. At the same time, technologies for measuring physiological response have started to improve. Eye tracking, an approach used by BA, First Direct, Lycos and Yahoo!, is a good example of this. Until recently, eye-tracking studies involved wearing heavy head-mounted cameras. Now the process can be carried out with just a pair of goggles, or a small video-style camera placed below a television or PC screen.

Eye tracking measures tiny movements in the eye to produce a log of what someone saw, what they missed and how long they spent looking at a particular part of a display. It has been used to evaluate mail-shots, store displays and advertising, but performs best on the Web. “It pinpoints the best positions to place cross-selling messages or advertising,” says Howard Barber, associate director at NOP World Financial, which has worked with eye-tracking company Eyetracker.

Useful though it may be, eye tracking merely scratches the surface of what companies would like to know about their customers. “It tells you what someone did, but not why they went online or how comfortable they felt with the site,” says Quaestor Research &amp; Marketing director Caroline Bond. To get some idea of whether marketing is working, brand owners need to know not just that their messages have been seen, but whether anything has changed in the consumer’s mind as a result.

Neuromarketing promises to supply the missing pieces in the jigsaw by showing how our brains react when we watch an advertisement or sample a product. The best known technique, functional magnetic resonance imaging, measures blood flow to work out which parts of the brain a piece of marketing has activated. The downside is that the technology is expensive and the participant has to lay inside a scanner.

It is exactly brain science

Less well known, but arguably more readily exploitable, is quantified electroencephalography – a rival technique promoted by Neuroco, a recently formed UK company. It uses scalp electrodes to record changes in electrical activity in different regions of the brain second by second. But just how much can be gleaned from analysing neural responses?

Quite a lot, if the PR is to be believed. By studying patterns of brain activity, claims Neuroco, a trained observer can tell how much attention someone is paying to advertising, whether they are engaged or turned off by its message and even whether they are laying down memories of the brand for the future. At face value this is powerful stuff. But not everyone is convinced that the benefits will be realised.

To begin with, technologies that owe their origins to medical enquiry might not perform to order in the business world. “In controlled environments [such as laboratories] it is possible to make assumptions that may not be true elsewhere,” says University College London professor of cognitive neurology Richard Frackowiak. Then there is the tricky business of turning biological data into insight that is commercially sound.

To take a simple example, a record of someone’s brain activity might suggest that they were repelled by a piece of marketing – but if the intention was deliberately to shock, as for instance with the NSPCC’s child cruelty campaigns, would this be good or bad? Similarly, a company might show consumers alternative versions of an ad execution and note that one provoked a more positive and “engaged” response than the other.

The snag here is that some of the biggest advertising successes of all time – such as Heineken’s “refreshes the parts that other beers cannot reach” – initially flopped with consumers. “The basic problem is that advertising works in many different ways, so an initial response isn’t necessarily a reliable guide to effect,” says David Iddiols, senior partner at research agency HPI.

In recognition of such complexities, neuromarketers advise that their methods should be used as part of a package encompassing both traditional and new science-based techniques. But some marketers say the whole idea of hi-tech research is flawed and that its use drives a wedge between advertisers and customers. “The truth, paradoxically, is that it’s impossible to get into someone’s mind when they’re hooked up to a machine, with probes over their face and body,” says Miles Calcraft Briginshaw Duffy planning director Andy Nairn.

To create brands that people genuinely feel drawn to, Nairn argues, marketers need to adopt a “humanist” approach to research. “We should be treating consumers as human beings, not viewing them as Pavlovian dogs that we can make slobber for our products simply by supplying the right stimulus.”

The idea of treating customers as anything other than complex human beings seems laughable. But the truth of the matter is that marketers have a liking for simplified models of consumer behaviour and this can lead them astray. “In the real world, nothing works in isolation,” says Steven Melford, founding director of ideas business Clear. “The brand associations that we make are built up over time through hundreds of encounters with different elements in the communications mix.”

So how can the market research industry move forward? One response is to capitalise on the new approaches, by going into partnership with their developers. The thinking here is that brand owners will inevitably be drawn to new approaches, such as neuromarketing, because they promise to turn the fluffy stuff of brand attraction into hard science. “The worst thing that we could do is to sit around watching to see how neuroscience pans out and then react against it. If it helps to get ads made, we should be using it,” says Chris Forrest, partner at qualitative research company The Nursery.

The alternative is to absorb the latest thinking about how the brain works, without buying into observational tests. The argument here is that great brands are built by creative thinkers who understand intuitively what engages people, not by technicians armed with analytical tests and scorecards. As Nick Southgate, strategy leader at creative agency DFGW, puts it: “If you want to understand how other people will react, you should think about how you feel.”

But what of the argument that brand decisions are made subconsciously, placing them beyond the reach of normal research methods? Well, maybe the inner world of the consumer isn’t quite such a closed book as it is made out to be. We may form our impressions of brands subconsciously, but we still have some sense of what we feel – even if we cannot quite put this into words.

With science-based approaches, the route to capturing these shadowy sensations lies in clinical-style investigations; with qualitative research the pathway is less direct, but not necessarily less effective. Getting people to describe what they “felt”, rather than what they “thought”, picking up on the subtle nuances of words, using visual stimulus imaginatively and watching out for giveaway clues in body language and facial expression are all techniques that can help to overcome the limitations of traditional research.

“The biggest mistake is to press for definite answers,” says Grahame MacMullen, associate director at research agency RDSi. “People don’t think in sentences, they think in concepts, words and emotions, so that is what we need to work with as researchers.” He adds: “We have to be clear on the fact that it’s the first things, not the last, that people say that provide the best clues as to what they are feeling.”

The idea that it will one day be possible to know with perfect certainty what people want holds a powerful fascination for businesses. But this is just fantasy. No research technique can offer certainty – just some clues and possible directions.

And that may be a good thing. When focus groups rejected Heineken’s popular ads, it wasn’t because they were being obtuse or contrary. It was probably because the humour was too offbeat or too strange to appeal on first viewing. As it turns out, being able to read minds isn’t necessarily an advantage in marketing – because knowing what your customer thinks today may well be a poor guide to what they will think tomorrow.

BAA’s in-house media division is set to meet 20 leading brands to discuss advertising opportunities across the company’s portfolio. Media@BAA says it aims to demonstrate that it can produce tailored packages that are “more than simple two-dimensional boxes” for clients. Media@BAA brings together all the advertising and sponsorship opportunities available through BAA’s six industry partners: […]

Virgin Radio, the SMG Group-owned station, is revamping its marketing strategy and introducing a new strapline in a move aimed at positioning Virgin as a lifestyle brand. Through the repositioning and new strapline – “The Music We All Love” – Virgin hopes to tap into the emotional attachment that listeners have to music, and to […]