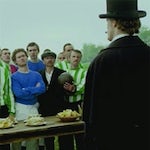 Tennent’s Lager tomorrow launches the latest advert since it took over the sponsorship of the Rangers and Celtic football teams – the so-called Old Firm.

The new 40-second television and cinema ad, created by Edinburgh-based agency Newhaven, is the third advert since Tennent’s was bought by C&C Group.

The ad “imagines” what founder Hugh Tennent’s take on football sponsorship could have looked like when the brand was starting out in the 1880s.

The ad, entitled “New Firm”, sees Hugh embark upon a novel sponsorship of two fledgling Glasgow football teams, Celtic and Rangers – both formed in the city in the same era as Tennent’s – with a twist on how the iconic red T is displayed by players.

The new advert plays on Tennent’s recently-announced sponsorship of the real ’Old Firm’.

In May, the lager brand confirmed that it was ending its sponsorship of the Scottish national team to concentrate on its partnership with Rangers and Celtic.

The brand has had sponsorship agreements with the Scottish Football Association for 36 years but is now focussing on its backing of the Old Firm, with the first of the ads airing in June.

Tennent’s is nearing a 40 year association with Scottish Football which has also included sponsorship of the Tennent’s Scottish Cup from 1989 – 2007, and the famous Tennent’s Sixes which commenced in 1984 and ran until 1993.

Tennent’s ’New Firm’ will launch on television on 10 August on STV, Channel 4 and Five, and will also be screened in cinemas throughout Scotland .

The lager brand was bought by C&C Group in August last year.