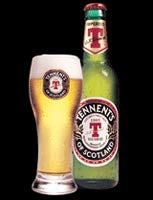 Tennent Caledonian, the Scottish brewer owned by Interbrew, has been forced to change part of its World Cup campaign, for flagship Tennent’s lager, after complaints that it encouraged anti-English sentiment.

The &£100,000 campaign, devised by The Leith Agency, will run in Scotland from May 16, with press, radio, TV and online activity in addition to posters. The poster element of the campaign has been revised due to complaints. Originally, the posters featured the flags of the three teams competing with England in its first-round group, Sweden, Argentina, and Nigeria, with slogans encouraging Scots to support England’s rivals:”Support Sven’s Team”, “C’mon the tartan Argie” and “Och Aye Kanu” (referring to the Nigerian striker).

After protests, the executions for Sweden and Argentina will only appear on the company’s website. They will be replaced as posters by alternative executions using other countries – for instance, a Chinese flag with the slogan “The Peebles’ Republic”.

A company spokesman says: “Following concerns from a vocal minority we have revised one small element of our World Cup campaign.”

A spokeswoman for the Commission for Racial Equality confirms the organisation advised Tennent’s that the original posters were “not in the interests of best race relations”.

Sandra Mitchell has been promoted from marketing manager to brand controller for Tennent’s, overseeing all marketing. Last year, Tennent’s spent &£1.25m on advertising.