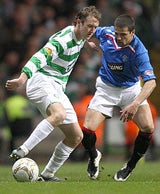 It is understood the C&C Group owned drink is on the verge of signing a deal with “The Old Firm” to become their shirt sponsor.

Carling’s deal expires at the end of the current season with Tennent’s reportedly favourites to step in after its sponsorship of the Scottish national team ends in the summer.

Tennent’s, which also sponsors music festival T in the Park, is Scotland’s leading lager brand where it accounts for 55% of all lager sold to the Scottish on-trade in terms of volume and around 30% of the Scottish off-trade.

The lager brand says it does not comment on speculation, while Rangers says it is negotiations with a number of parties.

Teletext Holidays is looking to explore digital marketing channels and how they can be combined with radio and outdoor advertising, says new marketing director Mark Bloxham.

Sports nutrition company Maximuscle is launching its female brand, Maxitone, with a campaign that includes the company’s first ever television advertising.