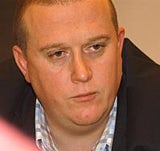 Jones, replaces Terry Green whose five-year contract with the supermarket is winding up.

He will run Tesco’s UK clothing and home business and formally headed up Sainsbury’s non-food business and set up its Tu clothing brand.

He has also worked at Marks & Spencer

Tesco is currently the UK’s fourth biggest clothing retailer behind George at Asda, Primark and M&S. Green is expected to maintain a consulting role with Tesco.

Tesco revealed last month that it is extending its double Clubcard points deal until later this summer.