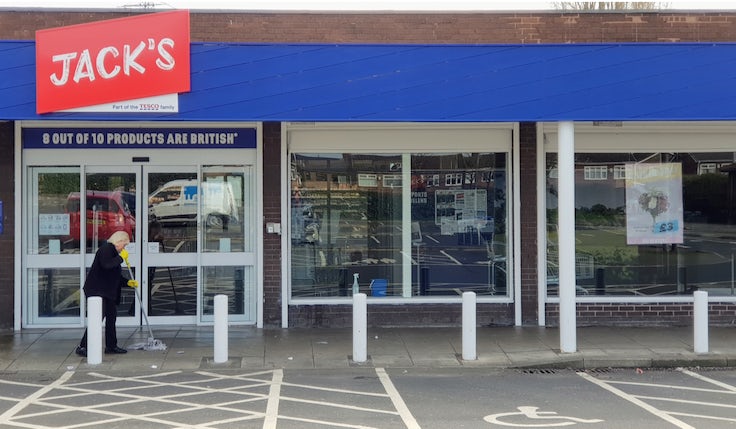 Tesco is shutting all 13 Jack’s discount stores, which it launched in 2018 to take on Aldi, saying it has learnt what it needs to from the venture.

The budget spin-off was unveiled three and a half years ago to mark the 100th anniversary of Tesco as a nod to its founder Jack Cohen.

But Tesco CEO Jason Tarry says having applied the lessons it has learnt from the discount store it is now time to refocus on the core Tesco brand.

The Jack’s brand won’t completely disappear however, with products from the range still available to independent convenience stores via wholesale provider Booker, which is owned by Tesco.

“We have learnt a huge amount from Jack’s and this has helped Tesco become more competitive, more efficient and strengthened our value proposition,” he says.

“With the learnings from Jack’s now applied, the time is right to focus on ensuring we continue to deliver the best possible value for customers in our core business.”

We have learnt a huge amount from Jack’s and this has helped Tesco become more competitive.

The ‘Aldi Price Match’, which was launched in March 2020, and the ‘Fresh 5’ fruit and vegetable discount offer, are both examples of propositions the supermarket introduced off the back of insight from Jack’s stores.

As a result of initiatives like this Tarry claims the business has been able to “consistently attract new customers to Tesco”.

Six of the 13 Jack’s stores will be converted to Tesco superstores, while the remaining seven will shutter for good. There are 130 roles in the seven closing stores and in head office that will be affected by these changes and the brand says it is currently working to try and find alternative roles at Tesco for employees who want to stay within the company.

At the time of its launch, Marketing Week columnist and Mini MBA founder Mark Ritson said the proposition was doomed to fail.

“You don’t win by beating your competitor at a game they have been playing for decades. You win by playing the game your way with your unfair advantages,” he said.

Tesco’s decision to close Jack’s follows the unveiling of four new strategic priorities in October, which are are designed to deliver increased customer satisfaction and grow or maintain UK market share, generating between £1.4bn and £1.8bn retail free cash flow per year.

The business has committed to providing “magnetic value” for customers, as well as the continued evolution of Clubcard, a focus on Tesco Express and rapid delivery services, alongside delivering further cost savings.

As the grocer reports a Christmas sales boost of 3.2%, Tesco is banking on its new media and insights platform, an “unwavering commitment” to value, and “heavy” investment into convenience to drive further growth this year.