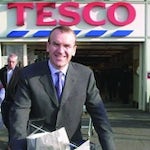 The Daily Mail reports that Sir Terry is the governing body’s preferred candidate to take on the role permanently.

Sir Terry announced in June that he would retire from the supermarket in March 2011.

The retailer would replace Lord Triesman, who resigned in May after allegations he accused Russia and Spain of bribing officials.

Roger Burden has been filling in on an interim basis.

A spokesman for the FA says the reports are “pure speculation”.

The FA is also without a permanent chief executive following Ian Watmore’s resignation in March. Alex Horne is acting CE.