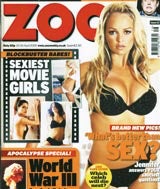 Retail giant Tesco is to obscure the front covers of mainstream “lads’ mags”, following complaints about their sexually explicit content. It will also move titles, including weeklies Zoo and Nuts to higher shelves. They will be given less space, so that in some instances only the masthead is on view.

Speaking at the Periodical Publishers Association’s Magazines Conference 2005, Tesco senior buying manager David Cooke said the company was responding to customer concerns, but that it was not censoring the titles – which also include Front, Loaded, Maxim and FHM. Other “less risky” magazines, such as Men’s Health, Stuff and T3, will continue to have their full front covers on display.

The Tesco changes will come in to effect on Monday. A spokesman confirms there are no plans to drop the titles. They will continue to be stocked as long as customers continue to buy them, he says.