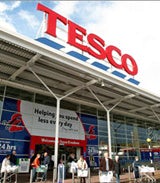 The scheme allows Clubcard holders to double the value of their reward vouchers and Tesco claims the scheme will give shoppers £100m in vouchers.

The double value vouchers can be redeemed against non-food products in-store or online. The double reward is in addition to the existing Double Points promotion.

The voucher exchange launches on Monday (8 November) and runs until 5 December.

The Big Christmas Exchange follows the first of Tesco’s voucher exchange initiatives, which launched in August.

Carolyn Bradley, Tesco’s UK marketing director, says: “In the lead up to Christmas, this promotion provides our Clubcard members with a great way to make savings. For Tesco, it’s our way of saying a huge thank you to our customers and with the broad range of items included, we’re confident that this Big Exchange will have mass appeal.”

Separately, Tesco has launched a press campaign featuring the newly launched Samsung Galaxy Tab with the strapline: “Every Little Helps on New Technology,” positioning Tesco as the destination to buy the top-end gadget.

Tesco is also offering a credit service to help shoppers spread the cost of buying the touchscreen tablet.