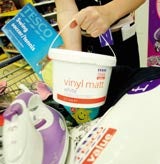 Tesco is considering using the mezzanine floors of its Extra stores to push its non-food catalogue venture, which is expected to launch later this year. The service is likely to encompass online ordering, and will pit Tesco against rivals such as Argos.

City analysts believe the UK’s number one supermarket is considering siting order points in upstairs areas, similar to those used for Next Directory purchases in the fashion retailer’s mezzanine space.

Tesco is rumoured to be preparing the catalogue, which could feature up to 1,000 lines, as part of plans to boost its non-food performance. Last year, it opened its first dedicated non-food Homeplus outlet in Manchester.

Analysts claim that Tesco Clubcard data, powered by Dunnhumby, the data specialist part-owned by the retailer, is likely to be used to target potential catalogue customers initially.

One retail analyst says/ “Tesco already stocks mini-catalogues in some stores, generally at the end of non-food aisles, featuring a range of branded equipment such as televisions. They can be ordered in-store.