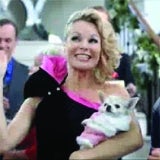 The supermarket chain says that sales at UK stores open for more than one year increased by just 0.6% in the six weeks to 8 January despite a Christmas campaign starring Britain’s Got Talent judge Amanda Holden and a major push for its Clubcard loyalty programme.

The performance compares with the 4.9% like for like bump reported for Christmas 2009 and the 1.5% reported for the third quarter of 2010.

It also falls short of rivals Sainsbury’s, which reported a 5.3% increase for the last quarter, and Morrisons with 1%.

Sales from the supermarket’s online retailer, Tesco Direct increased by 18% over the period.

International sales from its 5,000 stores worldwide rose 14.2% over the period.

Sir Terry is leaving the supermarket in March when commercial director Richard Brasher will takeover as UK CEO.