In a lift for new chief executive Dave Lewis, Tesco saw its sales increase by 0.3% for the 12 weeks to 1 February compared to the same period last year, according to Kantar Worldpanel.

But the figures should be viewed with caution, with Britain’s biggest supermarket still far from out of the woods.

For one, Tesco is still growing behind the overall grocery market, which is accelerating at a rate of 1.1%. Its market share is also continuing to fall – overall share fell to 29%, down from 29.2% last year, according to today’s figures. 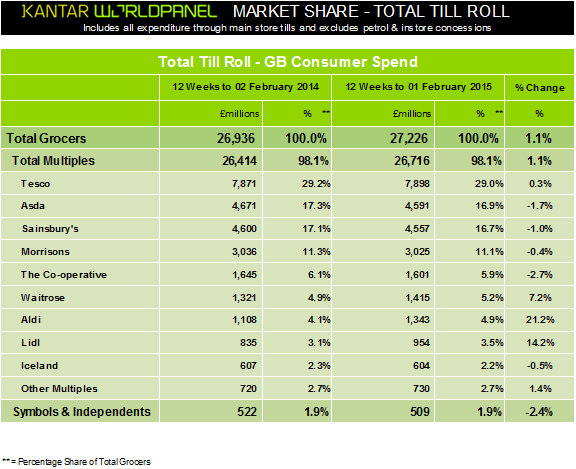 The discounters are mainly responsible for this dip and, in a development you don’t need Mystic Meg to predict, Aldi and Lidl, as well as high-end supermarket Waitrose, all once again saw rises in sales and market share over the latest period, according to Kantar’s data.

Tesco’s strategy under Philip Clarke seemed to be to swat the discounters and Waitrose like irritating flies, with the former boss responsible for a questionably aggressive store opening plan and costly additions to Tesco’s premium product lines.

Clive Black, an analyst at Shore Capital, believes Tesco’s turnaround strategy is starting to take shape. He said: “Shoppers are responding to the steps that Dave Lewis has instigated at the group – cleaner stores, better check-out experiences, stronger overall availability and selective but seemingly effective price reductions, including those announced in early January on proprietary brands

For the 12 weeks to 1 February, Lewis’s efforts to overhaul the supermarket chain attracted an “additional 236,000 shoppers into its stores,” according to Fraser McKevitt, head of retail and consumer insight at Kantar Worldpanel.

There seems to be more concrete evidence of a turnaround on YouGov’s BrandIndex ratings. Over the last 90 days, which covers the same period as Kantar’s data, Tesco’s brand buzz, which includes positive or negative messages consumers have heard through news, advertising or word of mouth, rose 14.9 percentage points to -27.8.

Its index rating, meanwhile, which measures consumer perception of quality, value, reputation and satisfaction, rose 4.8 percentage points to a score of 6.3.

There’s still a lot of work to do, however, with Tesco’s buzz rating below 25 other grocery retailers. On index, meanwhile, it is still significantly behind closest rivals Asda and Sainsbury’s, and even The Co-Operative, which, like Tesco, has suffered its own high profile scandals recently.

If it is to seriously relocate its mojo, Tesco desperately needs to remind customers what’s so great about its food and drink offer.

Over Christmas, Aldi and Lidl were on television more than Ant and Dec, with each perfectly banging on about the uniqueness of their products and successfully drawing in customers from all social backgrounds. Tesco must do something similarly bold.

Despite the green shoots, Tesco’s current positives appear to be more a short term result of it simplifying its in-store customer experience and entering a price war than due to an impetus on marketing.

If the turnaround is to be sustained, Tesco’s move to make BBH its main ad agency must show innovative results quickly. Consumers need to be consistently reminded about what makes Tesco so unique.

Tesco’s bid to repair its ailing brand reputation has been dealt a fresh blow after it was announced today that a government regulator will investigate the supermarket over alleged supplier breaches. 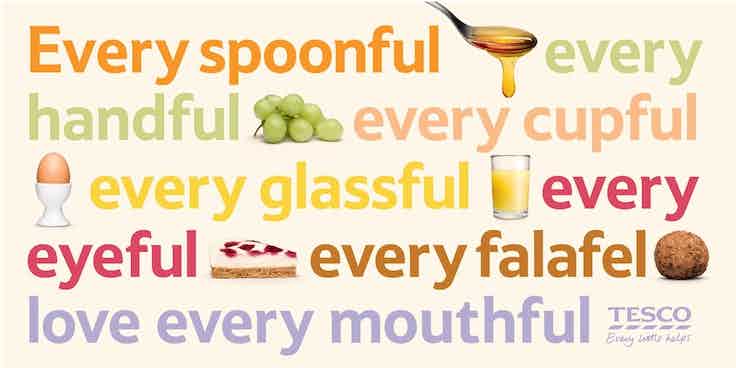 Tesco is dropping its creative agency Wieden + Kennedy in favour of BBH as it looks to turnaround its falling brand reputation.