Tesco is preparing to launch its discount store Jack’s across two locations tomorrow (20 September), as Britain’s biggest supermarket looks to take on the German discounters directly by offering consumers a “bespoke” experience.

Speaking at a launch event today at it’s maiden Jack’s store in Chatteris, Cambridgeshire, Tesco’s chief executive Dave Lewis said the company plans to open between 10 and 15 Jack’s stores across the UK over the next six months, making use of both existing Tesco space and new sites.

“When you see the signage you’ll understand how clear it is, and we wanted to do this because we wanted to give credibility to the people behind it and to our customers.”

That branding doesn’t extend to the products on offer, however. The vast majority will be labelled as Jack’s, with no sign of either Tesco products or those from its farm brands. There will be some big brands on offer as well, such as Cadbury.

Tesco is also keen to push its British credentials. Advertising in store and on package highlights that eight out of 10 products available in Jack’s are grown, reared or made in Britain, which it claims is a higher proportion than at any other grocer. According to Lewis, the decision to source local products was driven by listening to consumers. 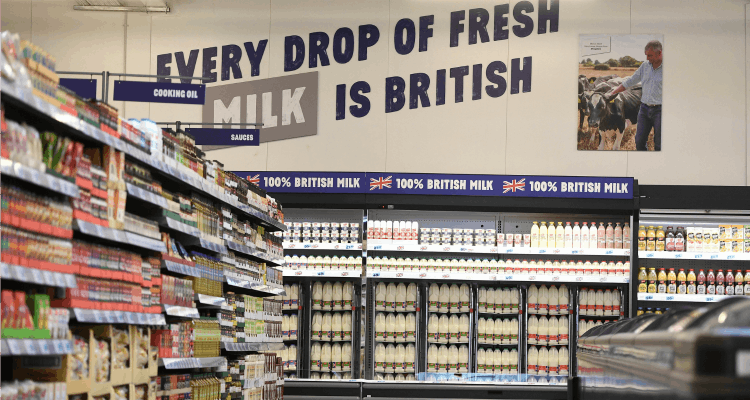 Research conducted by analysts at IGD found that 27% of shoppers suggest British or locally-sourced produce helps them identify a product as being of better quality. Meanwhile, 47% agree it’s more important to use local suppliers and 68% believe supermarkets should focus more on selling food produced by British farmers.

“What you’re going to see is one brand, 2,600 products, and 1,800 of those are Jack’s. One simple proposition, good value and outstanding product quality,” he says.

“This proposition is driven by what customers say they want in the UK. What customers tell us about provenance and the locality of products is that being British is something they like.”

British roots aside, Jack’s’s intention is also to be the “cheapest in town”, said Lewis.

“The scale of Tesco and the lower operating cost of Jack’s is what allows us to be cheaper,” he added.

Despite there being plans for just a small numbers of stores to start with, the question of whether Tesco is in danger of distracting consumers from it’s core grocery business remains.

And when asked why Tesco decided to launch a separate brand rather than simply offer customers a cheaper alternative in existing Tesco stores, Lewis argues that the pair offer two completely different shopping experiences.

“It’s a very competitive market but in all of my 30 years in marketing I’d rather cannibalise myself than have somebody else cannibalise me. Our job is to always be pushing ourselves to be better and if we can do better I’d much rather that Jack’s is challenging Tesco,” Lewis said.

Part of the reason for launching a separate brand is because Tesco cannot compete with the discounters because its offer is so different. Lewis highlighted that the high density of range within a Tesco store, which is what customers want from the business, add to costs.

“We’re meeting a desire customers have for us to curate that extensive range. Again, in regard to local sourcing, Jack’s allows us to deliver on that whereas it’s not something we could do due to the volumes with deal with at Tesco,” he said.

I’d rather cannibalise myself than have somebody else cannibalise me. Our job is to always be pushing ourselves to be better and if we can do better I’d much rather that Jack’s is challenging Tesco.

There’s no doubt the inside of the new Jack’s store has taken inspiration from Aldi and Lidl. For instance, in the centre is a promotion section consisting of 24 baskets and 48 products offered via a “When it’s Gone, It’s Gone” basis, similar to ‘Weekly Offers’ found in Lidl.

Aldi and Lidl also have strong messaging around “being British”, although Lewis said Jack’s differentiator is that majority of products are made, reared or grown in Britain.

“This (made, grown and reared) is different to sourcing from, or sourcing through. We absolutely think there’s a huge differentiator there,” he explained.

Jack’s will be headed by Tesco’s former retail director Lawrence Harvey, while a small dedicated marketing and advertising arm will be put in place to support Jack’s, reporting to Tesco’s chief customer officer Alessandra Bellini.

“Our small team will always leverage the knowledge we have available from the team at Tesco,” Bellini added.

“Because we’ve got a dedicated team looking at all things Jack’s, what it means is we can use all the good things Tesco has and bring it to the forefront through what we’re doing,” he said.

According to the Tesco boss, all advertising will be also done locally via leaflet handouts or in-store, with all activations tailored to the local community.

“Even when the opportunity for shoppers is growing we absolutely believe we can coexist with that sort of range (Aldi and Lidl). If you asked me personally, ‘do I think that Tesco and Jack’s can and will coexist?’. Yes I do,” Lewis concludes.

Tesco’s chief customer officer Alessandra Bellini will be appearing on the Customer Experience stage at The Festival of Marketing 11 October. For more information and to buy tickets go to festivalofmarketing.com

Tesco is reportedly set to launch a discount chain, dubbed Jack’s, across the UK this autumn but can it build a brand from scratch to truly rival the already well-established German discounters?