When Leahy took the reins in 1997, Tesco had just inched ahead of Sainsbury’s as the country’s largest supermarket. The plan was to establish the company as the clear number one, grow sales of non-food products and expand overseas.

“My work is almost complete,” he concluded today (8 June).

Indeed it is. Market share has increased from 20% in 1997 to over 30% at the last count (Kantar Worldpanel) and Tesco is now the fourth largest in the world behind Wal-Mart, France’s Carrefour SA and Germany’s MetroAG.

In April, it posted a 9.3% rise in net profit for its latest fiscal year to £2.34 billion, boosted by organic and nonorganic growth in Asia and a 5.6% increase in revenue to £56.91 billion.

Tesco’s group non-food sales also rose 6.2% to £13.1bn, with £9bn in the UK and £4.1bn in international. Electricals was a category which showed particularly strong growth for the retailer.

But with all that success, the question is: what next for the brand to which consumers have exhibited a ’marmite’ attitude?

Of course, there is the odd headache to remedy: the UK launch of electrical retailer Best Buy could pose a substantial threat to non-food sales. Fresh and Easy in the US still has along way to go before it starts pulling its weight. The Likes of Mintel are also predicting a ’retail recession’ in the next 18 months, with one supermarket boss foreseeing a ’bloodbath’ among the UK’s grocers.

Tesco is also not the only retailer overhauling its senior management and bringing in new blood. Marc Bolland has moved from Morrisons to M&S and Andy Bond handed over the reins to Andy Clark at Asda.

None of this is likely to dent Tesco’s dominance in the short term, however. The news that Leahy is leaving might have come as a surprise – what didn’t is the way the company has gone about replacing him. As Leahy himself points out, the team that has helped put the current strategy in place will be the ones taking it to the next stage.

Though this should smooth the way for Leahy’s successor, Philip Clarke, there will be an inevitable ’gap’ to fill given his record.

“Sir Terry’s courage and conviction has driven arguably the greatest brand transformation of recent history,” says Phil Harvey, JPMH chairman. “Whilst much of the team that have made this happen are still there today and are, no doubt, talented people in their own right – they will miss the clarity and bold decisiveness that is the mark of the man.”

Client director at Dragon Rouge, Joe Hale, says in losing Leahy, Tesco will lose an “almost impenetrable protective force around the brand that might now be open to attack and weakness in his absence. He had a bit of the untouchables about him.”

.An immediate dip in share value shows how the City feels about the man but what about from a consumer’s perspective? Though he has overseen the kind of success only a few can touch, his retirement will only be of marginal relevance to consumers unless there are tangible changes to their brand experience in-store.

Therein could lie an opportunity for Philip Clarke – the life-long employee who currently has responsibility for developing the group’s growing international operations in Asia and Europe.

Leahy’s departure will long be synonymous with the company’s success – its size, globalisation and domination of the market. On the flip side, Clarke’s arrival “will provide Tesco with the opportunity to reshape its core values, which have been perceived at times harsh and commercially brutal” says Daniel Dumoulin, partner at brand insight agency, Sundance London.

“Now is the chance for the new face and voice to add more emotion, belief and humanity to the brand,” he adds.
Marketing expert, Dr Stuart Roper from the University of Manchester’s business school agrees. His research shows the big corporate brands like Tesco don’t generally transmit a positive vibe to the man on the street. “They use them but they don’t like them,” he explains. “One way they could be seen to get around that is by looking at sustainability.”

And that’s exactly what some believe the new team, will do. With UK consumers expecting value, the top four have to work ever harder to differentiate themselves.
The changes post-Leahy could provide a picture – albeit sketchy – of the brand’s future direction.

Intrigue is provided by the creation of a new group commercial role, for instance: news on that is to follow, says a Tesco spokeswoman.

But more so it’s the extra responsibilities that members of the current board will take on that have got marketing tongues wagging.

Tim Mason is currently president and CEO of the company’s Fresh and Easy business in the US. Next year he’ll become Clarke’s deputy and assume group responsibility for branding, company values and climate change.

Mike Watkins, senior manager retailer services at Nielsen, among others sees the link between branding and climate change as a big clue to the future of Tesco – and retail more widely.

“Sustainability will be back on the agenda next year, and the success of the supermarkets will depend on who can communicate the issues best and who can show shoppers they understand it best. This may not only be the next phase for Tesco, but UK grocery more widely.”

Leahy’s legacy is to leave Tesco as the UK’s biggest supermarket, but those replacing him may be charged with making it the greenest. 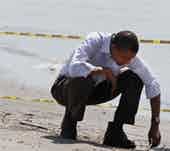 Retail sales rebounded in May, as the sunny weather boosted sales of outdoor DIY goods and summer clothing, but shoppers are still reluctant to spend money on expensive items, according to the British Retail Consortium.