Unilever’s price dispute with Tesco has led to a number of its brands experiencing a steep decline in consumer perceptions over the past few days.

The pricing row between Tesco and Unilever made headlines around the country. It was caused after Unilever reportedly raised the price of its products by 10% in a bid, it said, to offset the higher cost of importing caused by the weak pound following the Brexit vote. In response, Tesco decided to pull dozens of Unilever’s brands from its shelves.

The dispute was sorted less than 24 hours after it became public knowledge. Unilever said in a statement last week that the “supply situation has now been successfully resolved”.

But figures by YouGov BrandIndex show that the short-lived spat has had a negative impact on consumer perceptions of Unilever’s brands.

Marmite is undoubtedly the biggest loser after last week’s row. It has seen a “statistically significant” decline when it comes to buzz, which measures whether people have heard anything positive or negative about a brand, dropping 32.4 points to -23.7. It is now placed last on a list of 29 ‘dried ambient food’ brands, which includes competitors such as Nescafé, Heinz and Yorkshire Tea.

But that’s not all. Marmite’s reputation has also declined by 11.6 points, causing it to fall 16 places in the rankings. The brand’s value perception also suffered a severe blow, falling down to 19th place. Purchase intent among consumers has also dropped -3.9 points.

Other Unilever brands suffered a similar fate. PG Tips fell 24 places down to 28 when it comes to brand buzz, while Colman’s fell 17 places from seventh to 24th. The tea brand also saw “statistically significant” declines when it comes to customer satisfaction, recommendation and impression, which looks at whether customers have a general positive or negative feeling about the brand.

Tesco, however, has not escaped impact either. Its buzz score has dropped 12.8 points to -3.2, causing it to become the lowest scoring grocer in a list of 26 supermarkets. However, its value perception has increased by 5.2 points, thereby becoming the third most popular grocer. 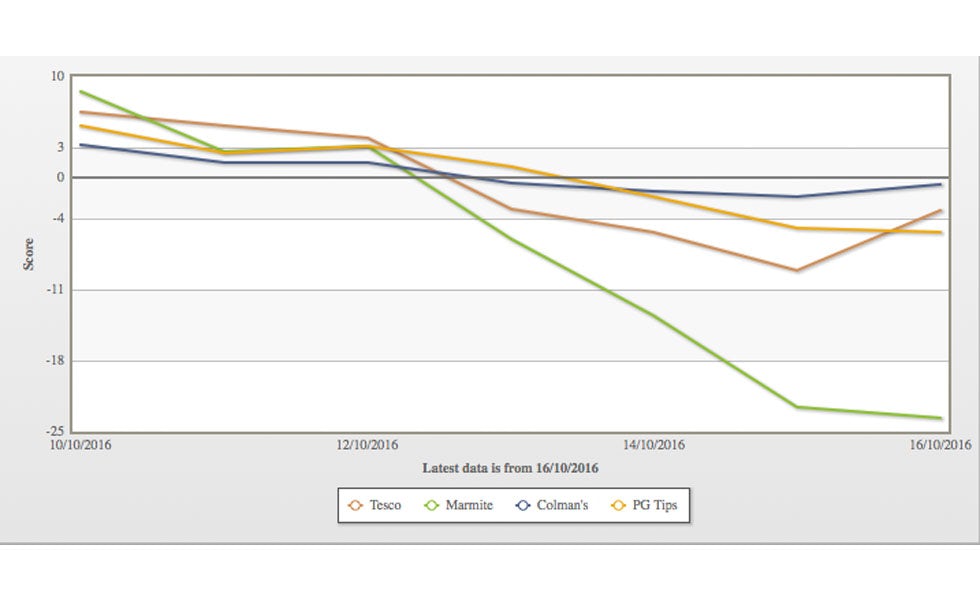 Tesco’s success comes amid a backdrop of slow sales growth and deflation in the supermarket industry.