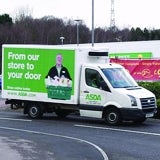 Tesco says the claim is “confusing and misleading” because it focuses on a narrow range of products.

The supermarket adds: “It’s a cynical ploy to mislead customers using a flawed comparison that excludes about half of Tesco’s range, including lots of products that customers buy every day – such as fruit, veg and meat”.

Richard Brasher, who will take over as UK chief executive in March, says: “It is vitally important that the whole industry acts in a way that deserves the trust of customers. We are calling on the ASA to act, and to act quickly, because in our view customers are being misled by false Asda claims.”

Asda launched the 10% pledge at the start of the year claiming that it now offered “the lowest supermarket prices in the country”.

If customers find that Asda’s prices are not 10% cheaper than rival supermarkets, The Wal-Mart owned chain will give them a voucher for the difference.

Tesco says that it will also accept the Asda vouchers, fuelling the price competition in the sector.

Morrisons has previously slammed the Asda Price Guarantee as a “stunt”. it says that Asda can’t compare its prices to Morrisons as they are not published online.