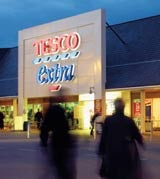 Supermarket chain Tesco is to roll out its in-store television network, Tesco TV, to its larger stores.

It is understood that the network, which carries news and information bulletins, sales messages from Tesco, tailored content and advertising from third parties, could be introduced in up to 300 stores.

JC Decaux is understood to have been handed the contract to sell airtime on the network – which is broadcast through in-store plasma screens – to brands and their agencies. The outdoor company already holds the contract to sell space on Tesco’s six-sheet poster sites, located at more than 200 stores.

Tesco TV has been piloted at the supermarket’s flagship store in Kensington, a Metro store in Canary Wharf, its largest UK store in Warrington, two stores in Cambridge and one in Surrey (MW August 14, 2003). Initial research conducted by Millward Brown showed that 75 per cent of shoppers thought that the service was good, but that screens located in the foyer added to customer confusion on entering a busy store and that there was a need for consistent noise-levels.

Spar and Sainsbury’s have also been conducting trials of in-store plasma screens.