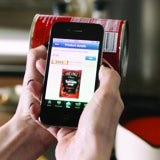 Tesco has moved to strengthen its mobile marketing arm by launching the first TV ad for a mobile app by a supermarket.

The ad will promote the Tesco Grocery barcode scanner iPhone app, which enables customers to buy products while on the go.

The app launched at the end of 2010 but the supermarket has opted to promote the app in January because of increased iPhone sales over Christmas. A spokeswoman adds that customers are looking for ways to make their lives more convenient in the busy first months of the year.

Mandy Minichiello, senior marketing manager for Tesco.com Groceries, says: “We’re the first grocery retailer to put significant budget behind app advertising and we think it [the advertisement] shows our customers just how easy and fun shopping can be with our Tesco.com grocery site.”

The ad, created by The Red Brick Road and Tesco.com Grocery’s marketing team, launches today (6 January). It features the ’Tesco couple’ Mark Addy and Fay Ripley using the barcode app to scan products they have run out of or would like to purchase. Tesco is the only UK supermarket with a full mobile strategy and has received over 1.5 million downloads across its app range, according to a Tesco spokeswoman.

Asda is the only one of the major four supermarkets without a mobile presence – Morrisons became the latest to unveil a mobile strategy in December last year.

Retail research specialist IGD and Deloitte predicted in December that online grocery sales will double to almost £10bn in the next five years, fuelled by developments in mobile technology.