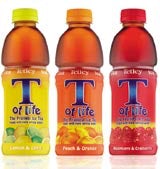 Tetley is to relaunch its T Of Life iced tea brand under the new name Tetley Iced Tea.

With a debate currently raging about whether the iced tea market is big enough to sustain three major brands, Tetley is keen to re-engage consumers “confused” by the T Of Life brand, according to one observer.

T Of Life lags behind both Nestea and Lipton, strongly supported by Coca-Cola and Unilever respectively.

The product, which launched with a 1m marketing campaign in June 2003, comes in five flavours – Peach &amp; Orange, Raspberry and Cranberry, Lemon and Lime, Green Tea with Apple and Green Tea with Grapefruit. It is made from four per cent fruit juice, spring water and tea.

Tetley will take the opportunity to revamp the range with a new label design, to try to gain greater consumer interest. The refreshed product will roll out from March.

But one industry source says: “Perhaps Tetley felt it needed to refresh things and reposition T Of Life, but it didn’t support the brand very strongly. The problem has been that consumers do not really understand or engage with the name – at least Tetley Iced Tea will tell drinkers exactly what the product is.”