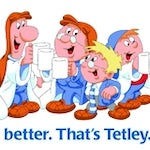 The news comes after intense media speculation over the return of ’Gaffer’ and the gang.

The new series of adverts, designed by MCBD, will start on 20 September during ITV1’s Coronation Street. They form part of a £9m campaign for the brand.

Since the characters last appearance in 2001 Tetley says it has received more than 10,000 enquiries demanding the return of the characters.

There are rumours that the characters have undergone a modern makeover, though the company has yet to release the exact details of the ads yet.

Records show that more than 157 million cups of tea are drunk each day in Great Britain.